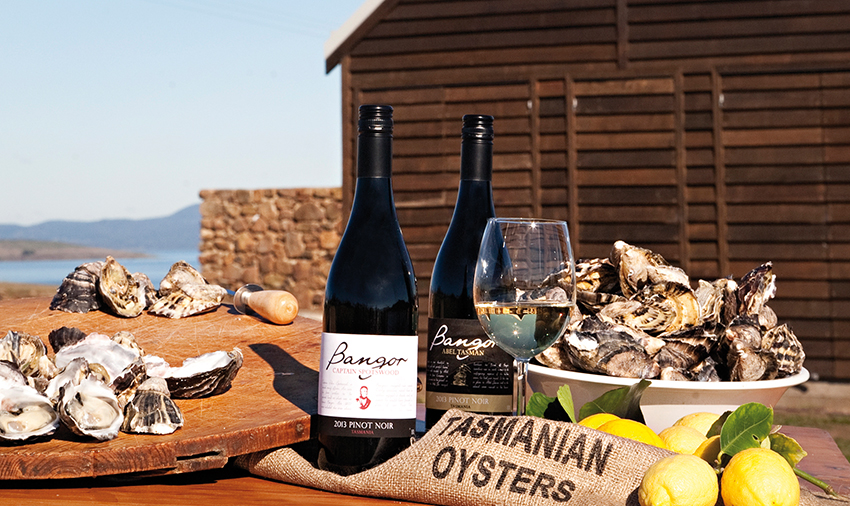 THE Bangor Wine and Oyster Shed recently celebrated its second birthday but remains something of an insider’s secret for Tasmanians. Just off the main road between Hobart and Port Arthur, the 6200-ha property is a working farm with a vineyard, a tasting room, restaurant and gourmet store, children’s playground with sand pit and will soon launch motorised bicycle trips through a beautiful area of bushland. Bangor also has a fascinating history as it was on the northern shores of the farm that Dutch explorer Abel Tasman sent crew members to plant the Dutch flag 275 years ago. While the Dunbabin family runs sheep and cattle on the farm 45 minutes from Hobart, the focus now is cool-climate Bangor wines, freshly shucked oysters from the Gray family leases just down the road and local produce. There are spectacular water views of Dunalley and Blackman Bay and the menu’s paddock-to-plate focus always features fresh seafood, including mussels and abalone, along with Bangor beef pies. There is a deck for warmer days and a wood fire for Tasmanian winters. Five generations of Dunbabins, dating back to 1830, have farmed in this region, starting with John Dunbabin, convicted of horse stealing. The farm, once the site of two whaling stations, has been owned by the Dunbabins since 1890 and is today managed by Matt and Vanessa Dunbabin and their three children. The northern shoreline looks almost the same as it did when Tasman and his men laid anchor in 1642 (there is a small memorial set back from the beach). Crew members searched for fresh water and edible plants but found little of either and while they saw smoke they did not engage with the local Aboriginal people. They sailed north before heading to New Zealand. To mark the links with Tasman, the Dunbabin family has released a new flagship wine; the excellent Bangor 2014 Abel Tasman Pinot Noir ($43), which has already picked up a couple of show medals. The family’s first 3ha were planted in 2010, and another hectare in 2014. Pinot noir, pinot gris and chardonnay are grown on site and vinified at Winemaking Tasmania. The property was badly hit by the 2013 bushfires but the vines survived. For those who want to arrive in style, Par Avion runs scenic helicopter flights directly to Bangor Shed, with a leisurely lunch included. Bangor Wine & Oyster Shed, 20 Blackman Bay Rd, Dunalley, Tasmania; phone (03) 6253 5558 or visit www.bangorshed.com.au.