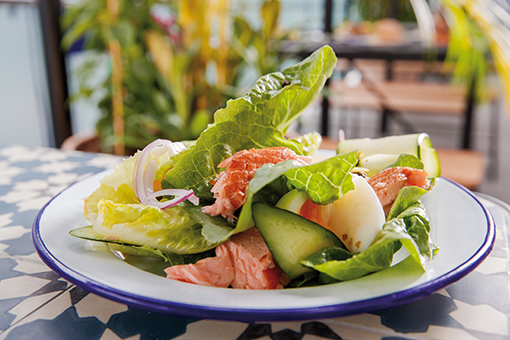 THE hilly and charming inner city suburb of Paddington, just west of the Brisbane CBD, lost the jewel in its culinary crown in late 2017 with the departure of Montrachet, a quintessential French bistro that occupied a pretty little shop on the main street for over a decade.
Lyonnaise-born chef Thierry Galichet created the bistro offering traditional dishes tempered to align with the balmy Queensland climate. Shannon Kellum bought the popular spot from Galichet in 2016 and kept the offering largely the same with the exception of Friday nights, at which he showcased his more modern approach to French cuisine.
Paddington’s loss is the new King St gain with a bigger, brighter Montrachet opening just before Christmas in purpose-built premises at the new Ekka showground-adjacent precinct, that is promising to become the newest eat street in town. And while some of the old world charm of being housed in a lovely old shopfront may have been lost in translation to the spanking new premises, Kellum’s attention to detail has ensured the experience is no less authentic. There’s a new element of grandeur about the place starting with the giant double-height doors, banks of mirrors and large feature lighting as well as the patina that only comes from seasoned European oak, salvaged from an English barn and reborn as character-filled flooring. The comptoir retains some of the familiar style, only this one is topped with impressive looking emperada marble and leads into a walk-in wine cellar. Leather covered seating (supplied by the furniture makers who also created the original Montrachet fit out) this time around sport burgundy hues replacing the vivid red of old. The footpath dining was always on a slight slope but not anymore. Seating is now about doubled thanks to the all-new alfresco dining space adjacent.
For those addicted to the Montrachet classics – the twice baked souffle of crab and gruyere, duck confit and the steak frites, fear not, they all still appear on the expanded menu alongside classics like roti d’agneau with pickled spring onion, cassoulet de legumes in a mushroom broth and seafood bouillabaisse. Degustation menus of four or seven courses are also on offer for full tables and the wine list has been expanded but is still unashamedly French and new world French varietals. 1/30 King St, Bowen Hills; phone (07) 3367 0030.
For residents of Paddington, there’s a new kid on the block. Margo opened where Montrachet once was to an appreciative crowd.
It’s the first venue for Americo Fernandes, a Paris raised and trained chef of Portuguese descent. He arrived in Australia in 2004 and has amassed an impressive resume of experience that includes Urbane and The Euro, C’est Bon, Bacchus and Malt Dining. Young, keen and produce driven, Fernandes says he takes a global approach to the incorporation of both the classics and a more contemporary approach to menu writing. Of the eight-ish entrees on offer both the duo of scallops with curry, asparagus, and corn and basil oil as well as the zucchini veloute with squash and housemade goat’s cheese stand out. Moreton Bay bugs are dressed simply with piperade and flecked with chorizo; the lamb rack arrived with a smoky babaganoush and an aromatic garlic cappuccino and for those looking for the comptoir classic, it’s all good – the steak frites remains on the menu.

Desserts are an exercise in herb-infused experimentation and reverence to time-honoured combinations and techniques – think rosemary creme brulee with orange and almond biscotti, peach marquis with tarragon meringue. The wine list is clever and ranges around the old and new worlds. Delicious little drops like Chateau de Castelnau Picpoul de Pinet 2016 perfectly match the elegant flavours of the food. 224 Given Tce, Paddington; phone (07) 3367 1516.
He started his foray into Queensland with a formal offering – a second Aria on the river at the Eagle Street Pier but since then Sydney-based chef and restaurateur Matt Moran has been progressively dumbing things down.
The website introduces the venue with a quote from writer and former Queenslander John Harms. “Queensland is a place, a people, a history, a climate, an architecture. But it is also a mood, a feeling, a spirit…a state of mind.” The website goes on to say, “Little Big House encompasses the rich history, the vibrant energy and the relaxed sun soaked lifestyle that is Queensland.” Part of the Solotel Group, the menu is divided between little and big feeds, there’s a rotisserie in play and there’s also karaoke but nothing that would make you return for a second visit and certainly nothing that would exclusively link the offer with that of the Queensland sensibility. Rather the baseline Aussie venue found in every city on the eastern seaboard. 18 Southpoint, 271 Grey St, South Brisbane; phone (07) 3727 3999.