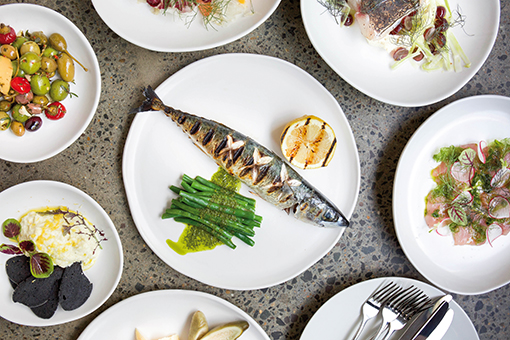 IN a strange twist of fate, Ete (French for summer) finally opened in December during the appropriate season. Originally the debut date was in the autumnal month of May last year. It was worth the wait for the Barangaroo waterfront restaurant, helmed by fine dining maestro Drew Bolton (ex-Aria, Quay and Vine). In spite of his upscale cred, Bolton views his latest enterprise as the antithesis of a big night out dining experience and insists that the French-inspired eatery walks the dividing line between bistro and posh. There’s certainly plenty to spark regular visits. Like his counterparts in France, Bolton is dedicated to putting a modern stamp on classic Gallic dishes. To attract the corporates who people the surrounding office buildings there’s a plat-du-jour which changes weekly. But the real pull for winelovers, for lunch and dinner, is the fact that you can sample every bottle on the extensive wine list by the glass, thanks to the Coravin, the handy gadget which allows you to pour wine without pulling the cork yet prevents oxidation. A particular drawcard for French bottlings, including burgundies, mistelles and Alsatian rieslings. Seasonality is a given at a restaurant named after one. There’s seating inside and out, and it’s hard to choose between the great outdoors and the post-modern interior designed by Foolscap Studio also featuring murals by Chicago-based artist, John Zabawa. A “live” wall is a showcase for floral and produce displays. The listings begin with a five-course chef’s menu. But we kicked off an a la carte meal with oysters piqued by an Aussie-inspired lemon myrtle mignonette. Seafood also proved to be irresistible when it came to entrees – poisson cru with lemon creme fraiche and pot du mollusques, a bowl of juicy clams, lardo, celeriac and wild fennel. Bolton is also particularly fond of another much-ordered starter – his take on traditional veal tartare. Ethically-sourced Torello Rose veal is the heart of this carnivore’s treat teamed with foie gras, sauce gribiche and anchovy toast. Make sure you have the duck advised a friend who dined at Ete a week earlier. A solid gold tip I would pass on to anyone. Out came the juiciest duck breast in a sumptuous setting of radicchio, orange and sauce bigarade. For all their haute cuisine pretentions, the French love a good steak and rightly so, especially when the juices run free as they do from Ete’s cote de boeuf with young garlic, pommes fondant and sauce bordelaise. Sweet tooths can sample all the desserts by ordering the assiette mignardise. Our spoons were put to good use with the vacherin, rhubarb and fromage blanc – a melting blend of meringue, fruit and cream – and cold chocolate fondant, pear and lavender ice cream – right down to scraping the plates clean. Another triumph for Bolton and his team and not to be missed. Ete Restaurant, 100 Barangaroo Ave, Barangaroo; phone (02) 9052 5383.
The business partnership at Culina et Vinum is made in restaurant heaven. Chef Naomi Lowry has worked at Sydney hotspots such as Pilu and Popolo and Abhinav (Abhi) Mahudevan is the son of Kumar Mahudevan, the godfather of Indian cuisine in Sydney, and owner of the famed Aki’s and Abhi’s restaurants. Surrounded by the grand apartment blocks of Elizabeth Bay Rd, Studio Messa has performed a brilliant design feat by making what could be a dark space into an oasis of light. But the real magnet is the warmth of the staff from the moment you walk in, which makes it easy to relax even before you have looked at the menu.

It’s become common practice these days to charge for the bread Italian-style. Embrace the custom at Culina et Vinum because the grain bakery bread is the perfect foil for the snacks offerings, including brandade de morue, marinated olives and heirloom potatoes dusted with chilli. Sharing is encouraged and there’s plenty of choice for everyone in the small plate and larger plate lineups. Refined comfort food is the best label for most dishes such as peppered mackerel, grapes and celery, and the now ubiquitous chicken liver parfait, port jelly and toast. A thread that keeps going through mains, including pork belly, poached peach and black cabbage, pea risotto with spanner crab, seaweed and chives, and the signature dish of roast spatchcock, mustard and caraway roasted carrot and kale. There’s a spiffy nursery feel to dessert (Lowry is English) and it was a pleasure to see treacle tart with buttermilk sorbet and lemon balm amid the short lineup. Grandma’s scones with ricotta and mascarpone showcased the fact that the dish was inspired by a nanna who liked the finer things of life. Thirty wines by the glass and a curated selection of European and Australian bottlings complete the Vinum part of the restaurant’s title. A real find if you are looking for a centrally-located local, but there’s a major parking station nearby if you want to come from further afield. Culina et Vinum, 19-23 Elizabeth Bay Rd, Elizabeth Bay; phone (02) 9356 8307.
Louis Hong opened Monte at the quiet end of Norton St, Leichhardt, just over a year ago. A graduate of Cordon Bleu Australia, he also polished his skills at Bistro Moncur in Woollahra and The Cook’s Garden in Turramurra. The decor inside and out displays as much good taste as the food. Be warned – it will take you about 10 minutes to choose your entree and main course because everything on the tightly-edited menu is up for serious consideration, veering from French through Italian and Asian influences. We plumped for the twice-cooked goat cheese souffle and torched New Zealand king salmon with ponzu dressing, pickled radish and wasabi aioli to hone our appetites. The taste sensations continued with the char sui crispy duck leg, shiitake, coriander, consomme and Korean pork dumplings and the twice-cooked Bangalow pork belly with butternut pumpkin puree, green apple, puffed black rice and caramelised apple gel. One of the best fine dining restaurants in the inner west with reasonable prices, too. Monte Restaurant, 1/256 Norton St, Leichhardt; phone (02) 9568 5377.