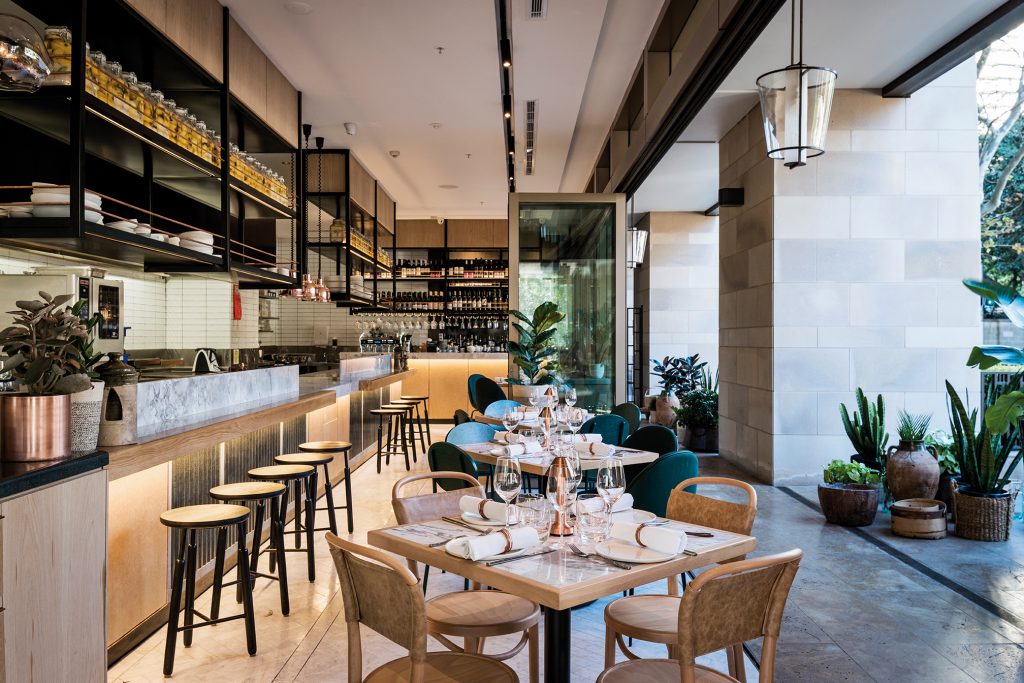 SENIOR police officers must have wept when NSW Police Headquarters were relocated from College St in the CBD to Parramatta in 2003. No more million-dollar views of Hyde Park and a quiet lunch listening to the birds. The Residence, a luxury apartment block, took over the prized chunk of real estate. At the end of June, Sydney diners could at last enjoy the panoramic vista over Sydney’s “green lung” once a major perk for the city’s finest, thanks to the opening of The Resident. Maybe it was intentional. The sleek premises feature travertine flooring, leather finishes and – ahem – copper detailing. Synchronicity also rears its head with the choice of chef, Spaniard Pedro Tordesillas, who originally studied law before discovering a passion for food. He earned his Australian cooking chops at Otto but is renowned as the former head chef of Ortiga, the Brisbane restaurant which rose to national fame. The Resident is owned by The Lotus Group, famed for its Chinese restaurants, including The Galeries. Tordesillas sticks to his Spanish roots but avoids the word tapas, even though many of the share plates fit the description. For anyone fearful of going hungry, there’s no chance of that with the star turn of the larger dishes – 1kg dry aged rib eye, leaves and herbed desiree potatoes. The snacks are a bit like the building itself – traditional mixed with modern – veering from olives to escabeche of mussels and oysters topped with a granny smith and chardonnay granita. The wine by the glass offerings are equally eclectic from muscadets from the Loire to tongue-twisting Basque wines such as 2014 Txomin Extaniz Txaakoli. Keep in mind that you have to leave room for the char-grilled and larger plate sections of the menu when perusing the share dishes. The grilled tongue, quince, anchovy and endive was as startling as it sounds – in a good way. Other major thumbs-ups included – mussels, lemon myrtle, artichoke and dill, fried cuttlefish, egg and potato and cured sardines, pickled cucumber and tomato. Sommelier Annette Lacey has put together a wide-ranging wine list for connoisseurs, rather than budgeteers, to match Tordesillas’ inspired touch in the kitchen. Alsatian rieslings, red and white riojas and Italian pinot grigios mix it with some of the finest Australian and Kiwi bottlings. For those who live each day as if it was their last because one day it will be, there’s rarified French treats such as 2010 Taupenot-Merme Charmes Chambertin Grand Cru. The charcoal grill choices are simply sensational from the duck livers, saltbush and salsify to the Spanish mackerel, piperrada and watercress. No one had room to tackle the kilo of beef, priced at a hefty $95, but the lamb breast, smen and Ord Valley chickpeas were an exquisite meat substitute. Toss in a quartet of desserts that are worth the visit alone. Hot tips: the spaghetti pumpkin milhojas, an Iberian twist on millefeuille, and goats milk yogurt, orange and rosemary with tiny flecks of brik pastry. That view of Hyde Park? At night, its magical with the floodlit trees and monumental reliefs of the Anzac Memorial. By day, it’s hard to believe you’re in the middle of a city closing in on a population of five million. The Resident, 18 College St, Darlinghurst; phone (02) 8318 8618.

Comparisons are odious and frequently unfair. But I was reminded of the Baccarat Cristal Room restaurant in Paris when I walked up the stairs at Alpha Restaurant into Beta Bar. Paul Papadopoulos and the DS17 team have created a similar chic blend of exposed brick, plush furnishings and eye-catching lighting – albeit not as stratospherically priced as Baccarat crystal chandeliers. This gorgeous space was meant to open last year, but it’s been worth the wait. Chef Peter Conistis continues to entice Sydney diners with Alpha, one of the finest modern Greek restaurants in Sydney. His guiding hand is very apparent in the cocktail list and menu at Beta. Bar manager Nathan Cannon leads a team of movie-perfect bartenders who pump out Dirty Greek Martinis and Pisco Sours. I imagine some people might like to pop in for a drink or two and some olives on the side. Good luck to them. The share plates here are a knockout and it’s hard not to over order. Consider: sweetbread popcorn accompanied by zhoug skordalia, oysters with cucumber, green olive, rose and sumac dressing and the most innovative interpretation of Greek salad – a layer of feta cheese pudding and a mound of iced horiataki (the proper name for the universal salad) standing in for tomatoes and cucumber. On a trip to Athens once, I made a list of the best modern Greek restaurants in the city. The main reason? To discover how they could reinvent moussaka. Conistis has already excelled in this area with his iconic eggplant, scallop and tarama moussaka. At Beta Bar he does the same for the lamb variety. Simply superb. Beta Bar, Level One, 238 Castlereagh St; phone (02) 8599 8970.
I’m not a vegetarian but I am constantly in search of elegant, sophisticated food that just happens to be veggie. Earlier this year, Yellow, one of the trio of star restaurants run by Brent Savage and Nick Hildebrandt (the others are the Bentley and Monopole), started offering vegan and vegetarian tasting and a la carte menus. The splendid results would woo any dyed-in-the-wool meat lover. The menu listings might sound simple but leave any preconceptions at the door. Millennials mix it with Gen Xers and Baby Boomers to sink their teeth into kohlrabi, enoki mushroom and vegetable broth, young fennel, goat’s cheese and black garlic and baby potatoes, pepitas and king oyster mushrooms. Great food without any qualifications whatsoever. Yellow, 71A Macleay St, Potts Point; phone (02) 9360 4410.