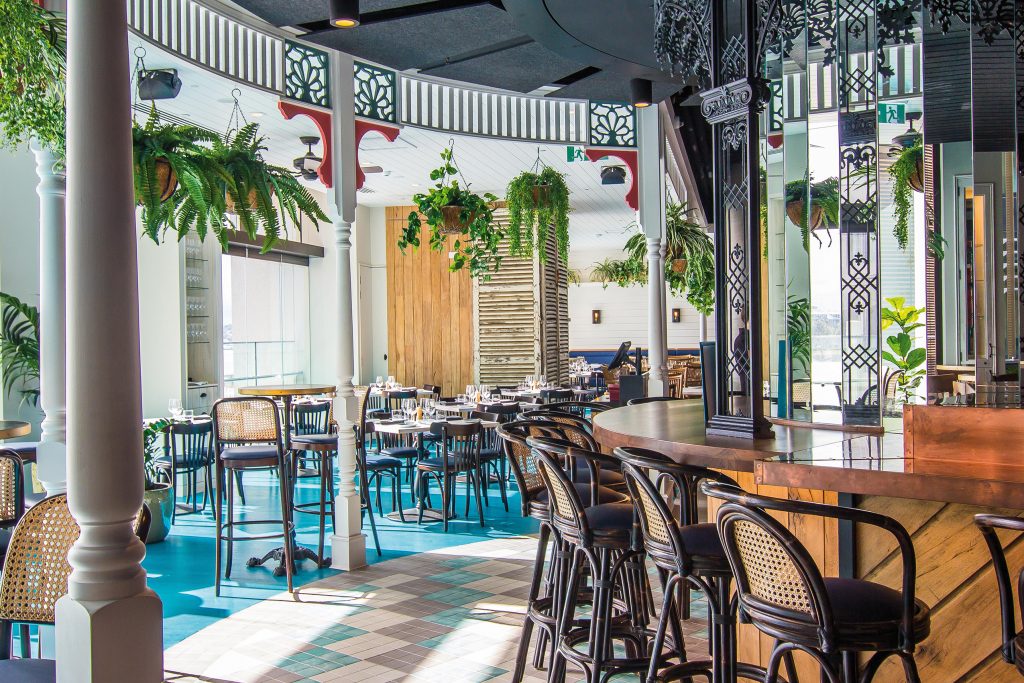 A MAJOR point-of-difference or a theme has become crucial to success in Sydney’s rapid-fire dining scene where a clutch of new eateries seems to open on a monthly basis. At Nola Steakhouse & Bar, one of the latest venues in Barangaroo, the trump card is a line-up of over 500 American whiskies, including limited editions and rare single bottles. The restaurant’s name is an acronym of New Orleans Louisiana, but there’s nary a gumbo or jambalaya in sight. “N’Awlins,” as the locals call their city, has always been a melting pot and that’s the direction owner Peter Fischer and executive chef Richard Duff have adopted. A little bit of French, Spanish, Mexican and African are the main influences on the menu, but there’s plenty of that old Southern tradition of barbecue in evidence, too. Nola boasts two large smokers which are kept constantly busy with up to 30 beef briskets and 120 chickens at a time. Duff is also a dab hand at house-made sauces from Lexington Style BBQ Ketchup to Green Sauce, a.k.a the bastard child of chermoula and chimichurri. Did I mention the view? Located on the first floor of Tower 1 in Barangaroo, the ocean fills the windows up to Jones Bay Wharf. But then the outside has a tough job of competing with Nola’s interior. Designers Luchetti Krelle have carved the space into four distinct areas – a VIP lounge that would look at home on Bourbon St, a copper and latticework bar for the line-up of whiskies soon to expand to 1000 bottlings, a cosy private dining room and a restaurant space filled with white timber and hothouse plants. Duff has worked the pans at London’s Bibendum, Attica in Melbourne and the Grasshopper in Sydney. A star-studded CV matched by sommelier Jarrod Mills, whose experience includes stints at Bambini Trust, Berowra Waters Inn, Guillaume at Benelong and Rockpool. The excess-all-areas approach to the whisky offerings carries over to the wine list – 150 selections by the glass or bottle from France, Spain, South America, Australia and New Zealand. Passing the 2.5m-long open grill, it’s hard not to make a big hunk of meat a default choice. And plenty of diners look no further than the Jack’s Creek Dry Aged Beef Brisket, organic chicken, tea-brined, smoked and blackened or the Pit Master’s Pick – 50g of each bbq dish with accompanying sauces and sides. But we were very happy with the other menu choices from lightly torched tuna sashimi and oysters rockefeller, originally invented at Antoine’s restaurant in New Orleans. You’re going to love this, said the waitress, as she served the char-grilled miso eggplant and the comment proved correct. Crawfish would be the seafood of choice in Louisiana, but Sydney yabbies proved a great stand-in grilled with maitre d’ butter. A perfect partner to the fries liberally sprinkled with chilli and eschalot salt. A great addition to the busy Barangraoo quarter, it was hard not to toe-tap as we walked along the waterfront reminiscent of a levee. Nola Steakhouse & Bar, Tower 1/100 Barangaroo Ave; phone (02) 9188 3039.

Thomas Derricott loves a good theme. The founder of Catmosphere, the Surry Hills cafe where moggy-lovers can book time with pampered felines, has teamed with Andy Curtis of The Bear Bar to create Johnny Fontane’s – a retro-style restaurant serving Sydney’s first Chicago-type deep dish pizza. Ella, Frank and Dean, as in Fitzgerald, Sinatra and Martin, dominate the ’50s-centric playlist and rightly so for an eatery named after the lounge singer in The Godfather. Normally I hate the phrase something for everyone, but it can’t be avoided at Johnny Fontane’s. Set amid a row of re-purposed terraces that ranks as East Sydney’s premier eat street, the gangster theme isn’t over-played. Stylist Belinda Cendron, known as The Sourceress, has conjured up a quartet of distinct areas whose only uniting theme is nostalgia. A glam hang-out of a bar, a Mediterranean-style courtyard out back, a Cuban cigar deck with panoramic city views and a timbered dining room with stained glass windows a la The Great Gatsby. Sinatra starred in the movie High Society with Bing Crosby and Grace Kelly, so a cocktail of the same name seemed a natural choice – Tanqueray gin with lime jam, prosecco, bitters and mint. There’s also a neat line in negronis and martinis to get you in the mood. Chef Cy Gwynne, ex Longrain and a native Chicagoan, has brought his expertise to the deep dish pizza menu. Even a front row forward couldn’t finish off one on his own. If you’re peckish one between four is a good benchmark, but if pangs are keen then two people can polish off the vegetarian ones at least. The Capone is the original innovation of Chicago’s gift to the Italian-American culinary lexison – topped with pork and veal meatballs. We enjoyed the excellently put together antipasti platter beforehand, so opted for The Gambino – a veggie mix of eggplant, tomato and zucchini. Cannoli was out of the question for dessert, so lemon gelato with candied chillies seemed the best choice to aid digestion. To paraphrase: When a moon hits your eye – and your stomach – like a big pizza pie. That’s amore. Johnny Fontane’s, 77 Stanley St, East Sydney; www.opentable.com.au.
A covetable setting and two pages of Japanese whisky listings await diners at Tokyo Laundry, the final addition to the Gateway Sydney restaurant hub at Circular Quay. It’s the first Sydney venture for David Loh of Dainty Sichuan and Bubble Cup fame in Melbourne. A champagne and oyster bar is a major lure for Sydney’s corporate crowd for an after-work treat, but the food is the thing. Chef Naoki Hozuwa (ex Yoshii and Sake) presides in the kitchen. EAT, the very apt name of the architects in charge of the fit-out, have created a chic-as space of steel, stone and antique brassware to play off the Japanese dishes with a twist. The lobster roll is a stand-out and so are the confit wagyu steak with roppongi sauce, Sydney rock oysters with yuzu, ponzu and saké and Korean fried chicken sticky with gochu-jang sauce. Tokyo Laundry, Level 1, Gateway Sydney, Circular Quay; phone (02) 9251 3323.