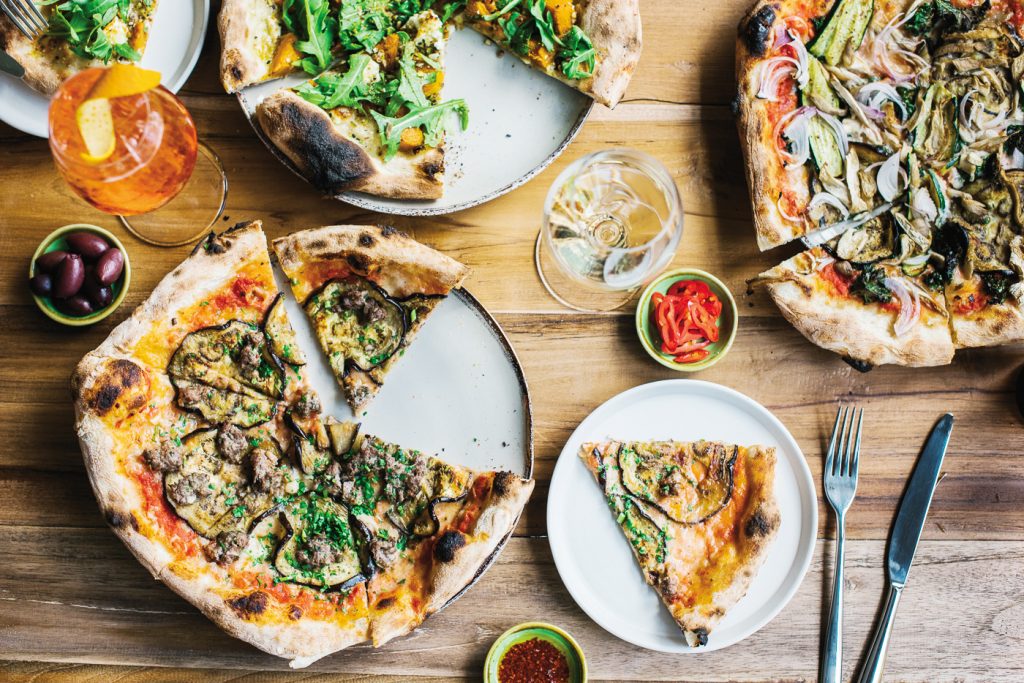 APART from Cafe Sydney, the culinary delights of Circular Quay used to begin and end with chips and indifferent pizza. Last September, the first stage of Gateway Sydney opened, a $60 million food and retail centre filling three blocks. The core of the new destination dining precinct is a three-level glass and sandstone homage to the Harbour City’s heritage and is the work of Woods Bagot Architects. The intent was to open up the Circular Quay end of the CBD says the developer, Dexus Development Group. Mission accomplished.
Foodies have the choice of 25 eateries, ranging from Neil Perry’s Burger Project through Gelato Messina and Chat Thai. The icing on the cake is Popina Kitchen, a 120-seat venue whose Mediterranean-inspired menu rubberstamps the fact that it’s a collaboration between the owners of Shuk in North Bondi and the Italian providore and restaurant group, Salt Meats Cheese. A 180-wine bottle wall jostles for your attention with a New York-style marble bar where Hamish Dowie (ex-Ananas) mixes up cocktails that take their cue from the food – The Italian Nod and The Highlands of Aegea. Vermouths (a highlight is the Oscar 697), digestifs and aperitifs are also a major focus.
Popina was the slang term for a bar in ancient Rome which served a lot of wine and a smattering of food. Consultant Andrew Jamieson didn’t let a stripline forebear influence his decisions and the wine list features top Italian, Australian and Argentinian bottlings. A South American flavour also spills over on to the menu, thanks to German Sanchez, the Argentine executive chef, formerly of Shuk and a seven-year veteran of some of Italy’s finest.
It’s tough to choose from the share plates. We plumped for the ocean trout with passionfruit, lime, chilli and kataifi pastry, hummus topped with cauliflower, spanish onions and pine nuts, and a perfectly cooked Argentinian empanada. The waitstaff also come from all over the world and are quick on the uptake in all aspects of service.
There’s only five main courses but that’s enough. The ravioli di ricotta with lamb backstrap, pistachio crust, mint and jus was one of the best pasta dishes I’ve eaten in a long while. Forget a thick cream sauce, the deeply flavoured meat jus and succulent lamb were perfect foils for the house-made pasta and cheese. The snapper with borlotti beans, ceviche salsa and heirloom tomatoes was as good as the view from the floor-to-ceiling windows.
There were plenty of diners stopping by for the 10-strong pizza menu. The tempting list of gourmet pies is a revelation of toppings, from green tahini through kale and lamb kofta. More so for anyone who remembers their counterparts from the old food court that once filled the location.
We only had room for one dessert and I strongly recommend The Alfajor, a combo of the nutty Spanish biscuit of the same name which is also popular in South America, dulce de leche mousse and coconut ice-cream. It’s a knockout. The chef’s selection of three sorbets, tahini cake and capresa – straciatella, watermelon, strawberry and melon – were ear-marked for return visits. Just the place to bring visiting colleagues, family and friends or enjoy a great meal or drink before or after an evening at the Opera House. Popina Kitchen, Level 3, Gateway Sydney, 1 Macquarie Place; phone (02) 9247 6446.

Throughout the year, in collaboration with Franz Scheurer of Australian Gourmet Pages, The Plump Duck will be staging pinot noir and Peking duck events. The sumptuous restaurant opened a few years ago as China Republic, following a $10 million fit-out by interiors maestro Paul Papadopoulos of DS17 (Alpha and Beta Bar). Now owned by Melbourne hospitality group AXF Entertainment, the new management has hired in-demand chef Shu Chen Lee (ex-The Eight), who works with fellow Peking duck guru Linyi Yuan to create a variant of the revered Chinese imperial classic that’s been hailed as “the best outside Beijing”.
The accolade isn’t wide of the mark. I’ve had some pretty mediocre versions in very expensive restaurants in Hong Kong and Australia, but The Plump Duck has come up with the sort of taste treat you can imagine a Ming emperor getting excited about. After careful pre-prep work, the duck is frozen for up to 50 days before being roasted in the specialised hung oven invented for the dish. What really sets The Plump Duck’s efforts apart are the sauces and accompaniments that owe little to tradition – from rolling the meat in sugar to spreading sweet soy bean paste and Chinese mustard sauce on the accompanying pancakes.
A new menu was also unveiled to mark the name change. Mixing Chinese cooking methods with ingredients from Europe and other parts of Asia, standout dishes include Antarctic glacier fish with tropical fruit sauce, prawn curry with chestnuts and wok-fried grade 7+ wagyu with sun-dried tomatoes. A very impressive wine list, too.
The Plump Duck, Shop 1041, World Square Shopping Centre, 644 George St, Sydney; phone (02) 8081 0888.
Calling Merivale’s makeover of the Queen Victoria Hotel in Enmore just another pub revamp is like referring to Michelangelo as a good ceiling painter. Anyone looking for the grubby old watering hole where patrons were also keen clients of the TAB is in for a shock. There’s been a name change here as well to Queen’s Hotel. Queen Chow is the ritzy centrepiece restaurant and its Shanghai Tang-style decor – burnished wood and golden glow of the lighting – sets the scene for serving what many are calling the best dim sum in town.
The kitchen is star-studded, as you would expect from the Merivale group. Think Patrick Friesen (ex-Mrs G’s), Eric Koh (ex-Mr Wong) and Christopher Hogarth (ex-Papi Chulo’s). Contemporary Asian has taken another huge leap forward with dishes such as typhoon shelter mud crab, hokkaido scallop sashimi, yuzu and quinoa shiso and roast duck with duck noodle soup. Arrive early or linger longer in the equally impressive The Smelly Goat bar. The best contemporary Chinese in the inner west and far further afield.
Queen Chow, Queens Hotel, 2/167 Enmore Rd, Enmore; phone (02) 9240 3000.