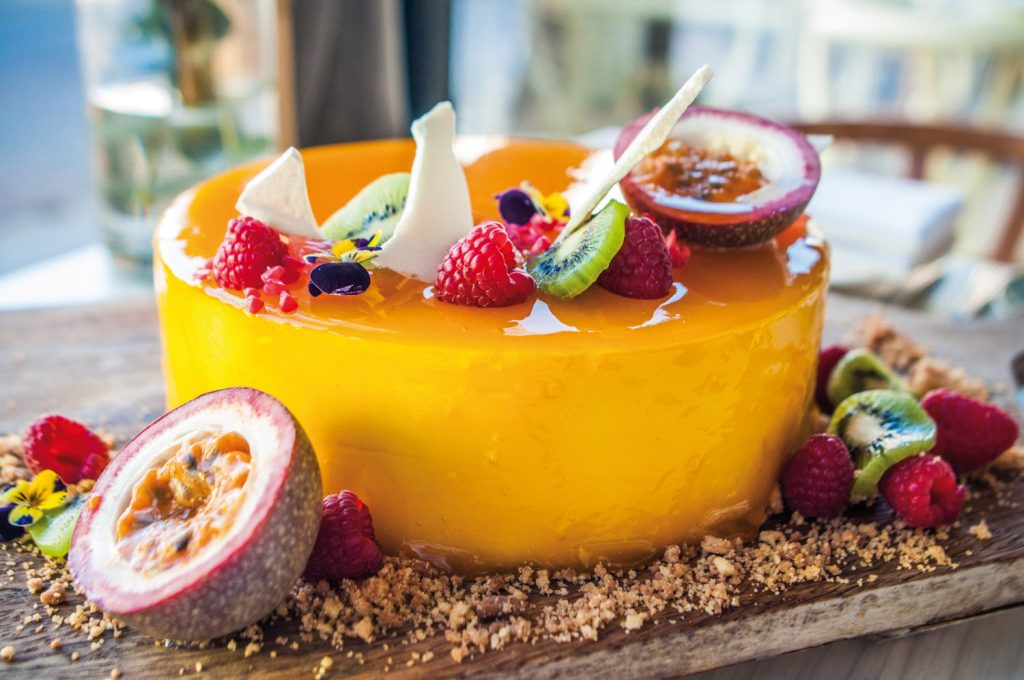 IN 2014 The Vine took over the back street location in Double Bay once occupied by Zigolini’s. Success was instantaneous, thanks to owners Gavin Douchkov and Manny Karson and gun chef Drew Barton. You don’t mess with a winning formula, but it’s wise to tweak things now and again. Chef Bolton has taken his culinary talents in a more organic direction and the venue has added The Garden, a botanic conservatory of a bar punctuated by wicker chairs, lounges and contemporary floral cushions. Noted mixologist Jason Crawley is behind the bar, sending out a steady stream of fruity, aromatic and leafy cocktails for the sophisticated clientele, backed by a well-edited lineup of beers, wines and spirits. The Garden also invites people who get peckish but don’t want a full-blown meal to linger longer with a new bar menu. Personally, I wouldn’t stray too far from the baked oysters with yuzu, sake and espellete, but the crispy vitello tonnato, stuffed zucchini flower, school prawns with chipotle and corn, and fried chicken in tarragon yogurt should be mentally bookmarked for a return visit. Bolton is a man on a never-ending mission – to constantly better himself. No easy feat when you’ve worked with Matt Moran at Aria, Peter Gilmore at Quay and a trio of Michelin-starred restaurants in the US. There’s a distinct influence from his classic French training, but Bolton’s passion for seasonal produce is homegrown and he indulges in regular foraging trips to his childhood stamping ground – the Hawkesbury region. The Vine enjoys most favoured status for high profile corporate events and brand launches for its Hamptons feel. It’s easy to see why there are many repeat bookings, as I tucked into a second helping of those sake-spiked oysters. Chicken liver parfait is having a major moment in many of Sydney’s fine dining restaurants, but not the liverish slabs of yesteryear. Bolton’s version seems super-charged with air and contrasts with blackcurrant, hazelnut, blueberries and raisin toast. Similarly lightweight, in spite of the generous serving, was the smoked ocean trout, curd, malted oats, marigold and horseradish. The cured fish teamed well with the snap and crackle of the oat wafer. Even when well-made, a plate of gnocchi can weigh on the stomach for hours. Again, Bolton manages to keep things light with his trademark dish of gnocchi, peas, hazelnuts, smoked ricotta and preserved lemon. A novel combination of flavours that made a welcome change from a white sauce. An egalitarian note is added by the popular chook cooked in the Weber, which proves that the old dictum that the well-heeled like their food to be simply good. For fashion and flair lovers, the blackened kingfish, celeriac, yuzu kosho reflects more modern Australian tastes. A refined take on perennial favourites ensure a brisk trade in desserts. Chocoholics are well-catered for with a souffle made from 70 per cent Valrhona guanaja, smoked chocolate fudge and nitro vanilla ice cream. Traditional should never be synonymous with boring and the creme brulee with figs and vincotto proved the point. The mango and passionfruit cheesecake, coconut and grapefruit, like the oysters, is an edible invitation to come back. As is the well-thought out and expansive wine list which also doubles as a “loyalty program”. The Vine, 2 Short St, Double Bay; phone (02) 9363 0010.

I have long been a devoted fan of Brent Savage and Nick Hildebrandt, the multi-talented maestros behind the Bentley, Yellow and Monopole. They have reprogrammed how Sydneysiders think of corporate, vegetarian and bar fine dining, and have now let loose their considerable talent on seafood at Sydney’s most talked-about development – Barangaroo. Their latest venture – Cirrus – is located on the site of the former Noma pop-up, where the ocean is so close you feel you can touch it. A speedboat hovering over the heads of the diners enhances the spectacular harbourside location further. Crustacean lovers will be in heaven from the marron, cooked on the charcoal grill, and enlivened with sea banana and lemonade fruit through the mud crab with green garlic and tarragon and Moreton Bay bugs in a palate-tingling cognac sauce. Murray cod gets the over-the-coals treatment and arrives on a bed of paperbark with a standout native ingredient sauce of bush tomato, pepper berry, lemon myrtle, fennel pollen and chilli. With Hildebrandt in charge of the wine list, there’s plenty of bio-dynamic and natural and French boutique bottlings mixing with Australia’s finest. Cirrus, 10/23 Barangaroo Ave, Barangaroo; phone (02) 9220 0011.
The re-jigged pub tsunami shows no sign of petering out. One of the latest multi-million dollar refurbs is the Paddington Inn, long responsible for many social hook-ups. Part of the Solotel Group, run by Bruce Solomon and Matt Moran, and Justin Schott (ex Rockpool) is in charge of the kitchen at the back of the hotel. The stunning decor is the work of George Livissianis who created the interiors for Cho Cho San and the Apollo. Order the onion foccacia as you peruse the menu. The whole roasted Thirlmere duck, pastilla and red cabbage became a cult dish from day one, as did the 850g Jack’s Creek rib eye. But there’s plenty to capture the interest of those with smaller appetites, from burrata with roast squash and pumpkin seed oil to chicken liver parfait with saffron pear and toasted gingerbread, and kingfish sashimi with beetroot, ponzu and blood orange. Schott grew up in London and it shows in the Earl Grey tea custard tart with prunes. Less nursery and more South Seas is the coconut sorbet, sweet carrot juice and candied ginger. Dress tip: wear your coolest outfit – casual or corporate. The Paddington Inn, 338 Paddington St, Paddington; phone (02) 9380 5913.