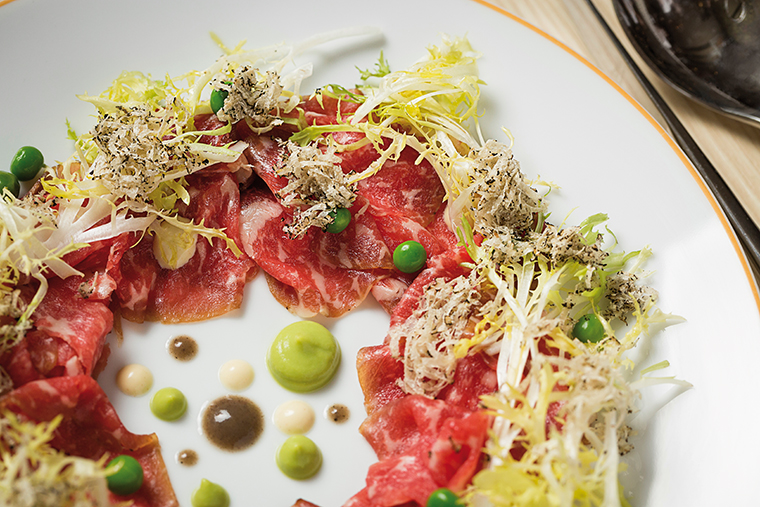 AROUND this time of year when Hong Kong appreciably drops a few degrees and you can walk a few blocks without having to dive into an air conditioned sanctum, thoughts of where to get proper “winter” comfort food spring to mind. Crusty meaty pies, Sunday roasts, hearty ragu, tender juicy steak… Well look no further as Mr Wolf, the latest concept from Castelo Concepts has emerged, keen eyed, limber and waiting for Hong Kong’s hungry residents to pour in through its welcoming doors.
Brit chef Jamie Draper helms the kitchen and arrives with some fanfare as he was most recently with the Roux father and son team as head chef of the Langham Hotel’s Landau restaurant in London. Expect solid portions and well-executed use of fresh ingredients – and you can’t get fresher than a whole suckling pig from the nearby wet market. Several dishes give a big bear hug of appreciation towards Draper’s classic British gastropub roots in the form of pork belly and chicken liver terrine, and Mr Wolf’s signature Cottage Pie, but then he changes the game with nods towards warmer climes, with his incredible Morton Bay bug salad and soft shell crab with sriracha mayo. With Draper’s attention to detail, a buzzing terrace and a formidable wine list, Mr Wolf has truly emerged as leader of the pack. 5/F Crawford House, 70 Queens Rd, Central; phone +852 2526 0838.
Mention the Four Seasons and expect exclamations involving the French cheese cellar and its new, much-coveted six-seater chef’s table at its flagship two-Michelin star restaurant Caprice. The Four Seasons’ dining experience has been taken up a notch with the arrival of Guillaume Galliot from the Tasting Room in Macau’s ritzy City of Dreams. Determined to bring elements of his beloved home of the Loire Valley, Guillaume has introduced an explosion of new flavours to Caprice, including roast pigeon with confit legs, beetroot and port wine sauce. There are nods towards traditional French fare – beef tartare, for example, but even that comes jazzed up with caviar and gold leaf, and also the winning combination of lobster and tomato swirled in tomato water and vanilla oil. Despite all the fancy touches there is one hark back to Guillaume’s spell in Singapore’s Raffles Hotel (as the youngest sous chef ever to be planted there) with his prized king crab laksa with confit egg and lime. Just make sure you save room for the cheese board. Four Seasons, 8 Finance St, Central; phone + 852 3196 8888.

One thing Hong Kong is known for is having elegant restaurants sandwiched in shopping malls – principally because Hong Kongers love nothing better than to eat and shop. Pacific Place in Admiralty has seen a huge upswing in its dining options over the last year or so and Operetta was one of the first on the scene. With a large bar area offering an excellent happy hour (buy one get one half price between 5pm-8pm daily), Operetta brings an Italian flair to a mall where high-end lifestyle brands jostle with high-end restaurants. Enter chef Luca de Berardinis. Raised on a farm in Abruzzo and trained at some of Italy’s leading Michelin-starred restaurants – Ristorante Perbellini, Ristorante La Bastiglia and Ristorante San Domenico – Luca arrived in Hong Kong in 2012 where he found his metier in Il Milione and the Conrad’s Nicholini’s. For Operetta, he has downplayed culinary extravagance and has chosen to use only seasonal, fresh ingredients sourced from Italy, served imaginatively and without pretension. Staying true to Italy’s love of antipasti, Luca serves delights such as scallops saltimbocca – stuffed with ham and mozzarella – Australian wagyu beef carpaccio and hand-chopped Canadian butter shrimp tartare with zucchini and tomatoes. For the main event, save room also for Luca’s lamb ragout with morels and kale, monkfish tail wrapped in pancetta plus his fiery Nduja Diavola pizza with spicy sausage and salame. As a place for a smart, client-impressing business lunch, after-work dinner or a weekend feast, Operetta is a good value and palate-pleasing slice of Italy in the heart of the business district. Shop 112, Pacific Place, 88 Queensway, Admiralty; phone +852 2115 8080.