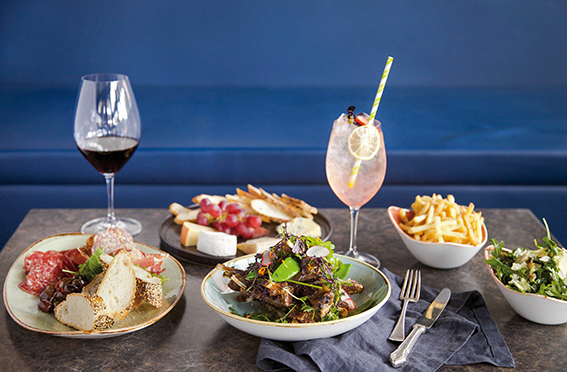 IT’S always interesting to discover how people acquire their nicknames. Following their arrival in Australia after an adventure trip of a lifetime hiking through eastern Siberia, Vincent de Soyres and Thomas Cauquil were dubbed the “Frenchies” by co-workers in Sydney. The duo thought the sobriquet was a great name for a business and opened Frenchies Bistro & Brewery amid the post-modern industrial sleekness of The Cannery food precinct in Rosebery. Close neighbours include leading providores and foodie magnets such as Kingsmore Meats, Saporium artisan supermarket and Archie Rose Distilling. With an emphasis on charcuterie and beer, Frenchies also punches home the craftmanship message with handmade tables made from oaks felled by de Soyres’ father in the Loire Valley. That’s where the homespun aspect ends. Cauquil has worked in Michelin-starred kitchens such as Le Violon d’Ingres in Paris and El Chaflan in Madrid. But in Sydney he is devoting his talents to bistronomy rooted in Australian tastes and terroir at affordable prices. De Soyres earned his brewing chops in Lyon and polished his skills in various Sydney venues specialising in French and German-inspired craft beers. In 2016 he won a silver medal at the Sydney Royal Beer Show for his Red Biere de Garde Astrolabe. On our visit it was tough to choose between the intriguing line-up of house-made beers, including a Cologne-style kolsch, a Kiwi pilsener, Comet American Pale Ale and an Aussie red rye ale. The wine list is an exercise in discovery from bio-dynamic and natural wines to premium Australian and French bottlings. Vintage cognacs also await anyone who wants to make an extravagant night of it. The premises are split into two levels. At the downstairs bar you can pop in for a beer or cocktail, a cheese or charcuterie platter. Cauquil trained under famed Paris charcutier Arnaud Nicolas, who has won the prestigious Meilleur d’Ouvrier de France award for his work. But the real culinary drawcard involves a short climb upstairs to the mezzanine level. The menu changes weekly as Cauquil seeks out seasonal ingredients to spark his creative juices. We couldn’t resist the chicken liver mousse, port jelly and housemade bread and duck and chicken paté en croute with foie gras and pickles as entrees to test Cauquil’s charcuterie cred. Even though other starter temptations included blow torched blue mackerel, fennel and hazelnut salad and green prawn ravioli with lemongrass emulsion. Seafood is also a major focus in the mains and it was impossible to ignore the lobster mousse served with a deeply-flavoured bisque and gurnard with potato puree and bay leaf sauce. Desserts are a lot more refined than your average French bistro offerings from the pannacotta with citrus marmalade to the confit of pineapple, mint almond financier and lemon sorbet. Perfect for lunch, brunch and dinner for first-class food with prices that also bring a smile to your face – $15 to $20 for entrees and $20 to $30 for mains. Frenchies Bistro & Brewery, The Cannery, 61-71 Mentmore Ave, Rosebery; phone 0432 290 743.

Anyone who affects surprise at Parramatta’s stellar food scene is an agoraphobic or really needs to buy a car from the area’s famed Auto Alley. Parra’s main drag, Church St, is the fifth most patronised eat street in Sydney after the CBD, Surry Hills and Newtown, and many of the restaurants sport spiffy fit-outs. But Alex & Co spawned headlines for its $2.5 million re-design, courtesy of the same interior experts responsible for the Watsons Bay Boutique Hotel and The Morrison Bar and Oyster Room in the CBD. Located beneath the shiny new Meriton Altitude Towers, Alex & Co’s 600squ/m spread is a triple-oriented venue – a restaurant, a cafe and a sleek bar with river views. Owner Alex Aslan, founder of QUIC healthfoods, selected the right chef for the job – Kyle Quy, ex-Nola Smokehouse in Barangaroo and hatted Bistro Ortolan in Leichhardt. Cocktail guru Max Greco, of Vasco Bar, has also come up with a drinks list to match Quy’s inspired touch with Mediterranean flavours and the freshest of produce. People bandy the word passion around so much that it frequently loses its impact. Quy is the real deal and decided to become a chef at the tender age of 14. He believes that the profession chooses you, not the other way round. A belief that’s easy to see from the bar menu snacks such as crumbed quail eggs with garlic aioli and pulled braised duck burger with black cabbage slaw, pear chutney, sesame and quince sauce to small plates such as pork belly, pickled cauliflower, balsamic, green apple, sauteed bug and pomegranate. In such a plush setting a little theatre pays off. I ordered the young kingfish tartare, sea grapes, watercress, tomato granita and green olive. The granita is made by a chef at the table using liquid nitrogen and then wasabi leaves are used to scoop up everything like san choy bow. Quy’s salute to Alex & Co’s locale is his customised “parra” spice mix. A secret blend, of course, it is inspired by Parramatta’s diverse cultural population. A natural sprinkled over french fries, I enjoyed its pizzazz in parra spice roasted chicken, asparagus, carrot and parsnip. Apart from the seasoning, the chicken was roasted to a rare succulence. Ditto the three-hour braised lamb shoulder, provencale crust, spinach, peas and spring beans. The coffee and pepper crusted venison, forest floor muesli, dark cherry and jerusalem artichoke was earmarked for a return visit. An edited list of five desserts covers all tastes. We asked for two spoons to devour the banana creme brulee, a non-traditional melange of chocolate marquise, salted caramel and Edmonds banana cake, the last ingredient outing Quy as a Kiwi. A great wine list seals the deal for patrons to converge from all over Sydney. Alex & Co, 330 Church St, Parramatta; phone (02) 9194 4499.
Most Sydneysiders find it hard to place the suburb of Banksia. But once you say it’s between the Ikea complex at Tempe and Rockdale, the lightbulb of recognition turns on immediately. The Banksia Hotel was sold for $13.5 million in late 2015 and has had a complete makeover. An even bigger drawcard than the decor is the fact that Colin Fassnidge, the so-called poet of pork and guiding light behind the Four in Hand and 4Fourteen, is in charge of the kitchen with Leigh McDivitt, ex- 3 Weeds at Rozelle. Simply fantastic is the description for elevated pub grub such as suckling pig sausage roll with apple sauce, a refined version of Irish stew and Ora King salmon cured in Suntory’s flagship Yamazaki malt whisky and blood orange. To keep prices down you order at the bar which is just the right touch for a suburban pub even with a star chef. Banksia Bistro, the Banksia Hotel, 288 Princes Highway, Banksia; phone (02) 9567 6389.