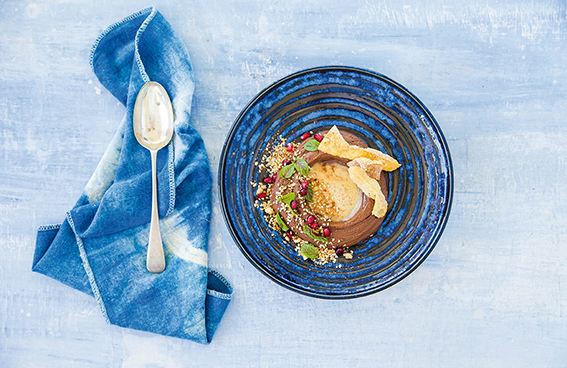 THE LOCAL joke in the southern waterfront enclaves of Kyle Bay, Oatley and Connells Point is that most people leave the area on a one way trip – in a coffin. Full of multi-million dollar homes boasting expansive views of the Georges River, inner city denizens have to Google the names of the suburbs because so few of the prestige homes feature in the weekly Saturday auction results. We arrived at Jaaks Restaurant and Bar at The Kyle Bay event centre on one of those warm, windless nights that exactly mimicked summer weather conditions on the Greek islands.
Contemporary Greek cuisine has built up a formidable rep in Sydney in recent years through Peter Conistis’ Alpha, The Apollo and Bazaari. The Christodoulou family, who run Jaaks and the centre, have been in the hospitality business for over 40 years. In 2016, two younger family members, George Christodoulou, and his sister, Diana Valsamis, took on the lease of the former Club Blakehurst and the property was given a multi-million dollar revamp to take full advantage of its spectacular location.
The talented duo, with backgrounds in 5-star hotels and finance, have also had the smarts to hire Arman Uz as executive chef, who kickstarted his career under the watchful eyes of some of Turkey’s finest chefs. He has also worked with Somer Sivrioglu, the godfather of Turkish cuisine in Sydney, and owner of the famed Efendy in Balmain and Anason in Barangaroo. The menu at Jaaks is mainly Greek with Turkish and Asian touches to create inventive and sophisticated dishes with heritage. Listings are divided into three main headings – flora, ocean and fauna. Don’t even think of not ordering the housemade village bread as you peruse the menu.
To be honest, we stocked up a bit too heavily on the sharing plates. Throw out any preconceptions suggested by traditional names. The golden beetroot hommus with turmeric and dukkah was light years away from a supermarket dip and Jaaks Greek salad bears no relationship to the standard offerings at mainstream Greek restaurants. Seeking out the finest providores is a passion here and the Tilba haloumi with local honey knocked the socks off any dish containing the versatile Greek cheese I have ever tasted.
A seafood dish was mandatory considering the Aussie waterfront setting and the Mediterranean menu. It took a lot of willpower to resist the Narooma oysters with pink shallots and white balsamic, octopus with smoked yogurt and black-eyed beans and taramasalata with squid ink crackers, avruga caviar and chives. But char-grilled whole fish is a speciality and the trout we ordered was so fresh it needed little or no embellishment.
The one regret driving home was that we had refused the offer of a doggy bag for the remainder of the Kreatopita – minced lamb pie in filo topped with minted yogurt. By the time this succulent dish appeared, our appetites were flagging. The wine list is a real drawcard and includes modern Greek varietals made from traditional grapes such as Malagousia and Moscofilero – bone-dry, citrus-edged whites. An absolute find and well worth the 25 minute drive from the CBD. Jaaks Restaurant and Bar, 12 Merriman Street, Kyle Bay; (02) 9546 5953.

David Mathlin and Binu Katari bought the Terminus Hotel in Pyrmont in 2016. In spite of its 170 year old heritage, most people knew the venue as “that old pub on Harris Street that’s been boarded up for 30 years”. Ace designer outfit Luchetti Krelle (ACME, Momofuku Seiobo) were called in to work in collaboration with heritage architect Garry Stanley for a $4.75 million makeover. The result is an amalgam of the best of old and new from ornate 19th century ceilings and Victorian tilework to contemporary slick.
Pyrmont is home to multi-million dollar apartment complexes and the corporate HQs of Seven Network, Google, L’Oreal and more, so the downstairs bar has been buzzing since day one. Another Efendy alumni, Bektas Ozcan, who has also worked at Matt Moran’s Chiswick, has gone for a posh pub grub menu with a few Turkish-inspired flourishes. The steaks from the grill are aged cuts from the Riverina and Rangers Valley. Gourmet burgers and first-rate fish and chips sit perfectly with mains such as roast pumpkin risotto, chicken supreme with rosemary, thyme, lemon and pearl barley salad. While starters such as rolled cigar borek, buttermilk drumettes and sumac-cured calamari help to soak up a refreshing ale, prosecco or a Charles Pelettier blanc de blanc sparkler from Burgundy. Terminus Hotel, 61 Harris Street, Pyrmont; terminushotelpyrmont.com.
There’s an old gag that runs – How can you identify pilots at a party? Answer: They’ll soon tell you. The waitstaff at The Imperial Hotel in Erskineville don’t waste a minute informing you that scenes from the movie Priscilla, Queen of the Desert were filmed at the Art Deco era watering hole, either. Following a $6 million reno by Sydney Collective and a fit-out by Alexander & Co, the main restaurant has been re-named Priscilla’s, of course.
The menu has a very south of the border slant with a dedicated ceviche bar. The vegetarian delights are announced with the tagline – Nobody puts veggies in the corner – and runs through wood-roasted beets, smoked labne, lime caramel, spiced pistachios and endive, zucchini noodles, chilli, single clove garlic and aged parmesan and crabless fritter, jackfruit, palm hearts, bay spice and chipotle mayo.
Erskineville has one of the most vibrant gay communities in Sydney and there’s drag and dine shows and more on the weekly event calendar. Half of the wine list features biodynamic and natural bottlings. A really fun night out and there’s also a lengthy list of craft and draught beers. The Imperial Hotel, 35 Erskineville Rd, Erskineville; (02) 9516 1766.