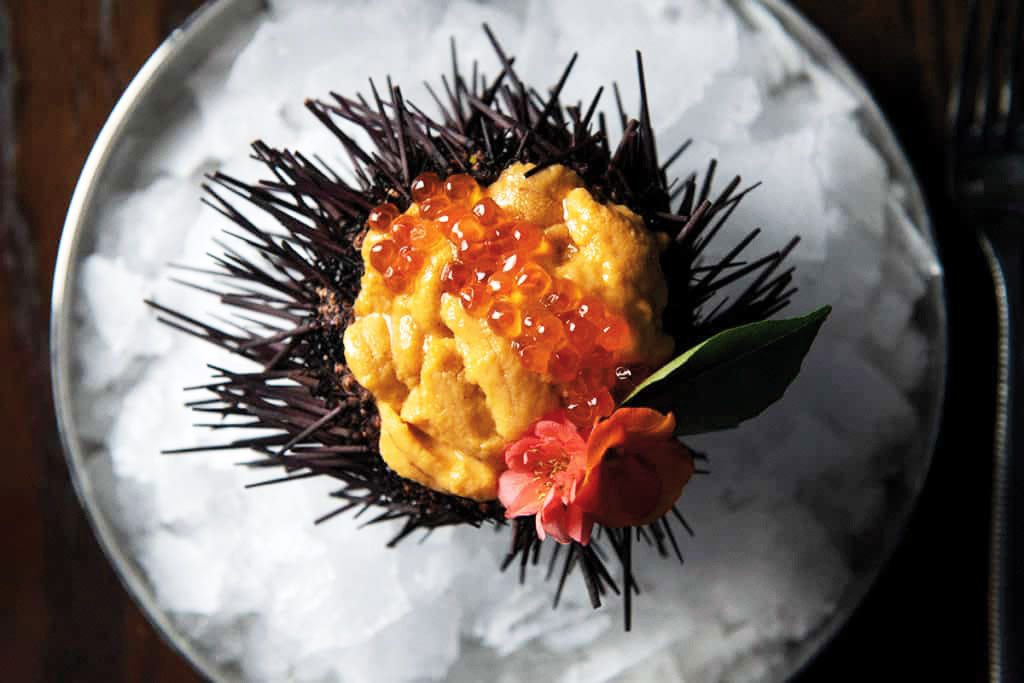 WHEN I first tried to make a dinner reservation at Eliza Food & Wine soon after it opened, the only spots available were children’s meal times – 5.30pm to 6.30pm. Many of the regulars at Jeremy Bentley’s former one-hatted restaurant, The Devonshire, had clearly followed their favourite chef from Surry Hills to Darlinghurst.
Sydneysiders prefer a casual vibe even in fine dining restaurants these days. Australians spend $45 billion a year on dining out and one of the major trends is low-end eateries moving upmarket and high-end ones moving down. Much of the change has been driven by millennials and the demo was very much in evidence at Eliza’s. Hardly surprising, as Darlinghurst is the number-one suburb nation-wide for the highest concentration of Gen Y and Gen X inhabitants.
The decor appeals to the younger, smart-casual crowd, too. Salmon-pink walls, teal blue tiles and a long marble counter with high stools, in addition to burnished timber tables. Eliza’s is co-owned by Bentley and Simon Rabbitt, chief business officer of Rugby Australia. The restaurant is named after the wife of early 19th century governor, Sir Ralph Darling, as is Darlinghurst itself. The only other history you need to know is that Bentley earned his stripes in Mayfair’s Michelin-starred The Square in London and continued to hone his French-style skills at Matthew Kemp’s Balzac restaurant in Randwick.
You can eat a little or a lot at Eliza. After work drop-ins can choose from an edited list of small bites, including salt fish brandade, pickled sardine, brioche and dill and prawn spring rolls flavoured with saffron. The local Gen X set tended to go for something more substantial during our visit and a clear favourite was the 12-hour lamb shoulder, sweet and sour eggplant and rosemary. We divided our tastes between very upscale surf and turf mains – mulloway, enoki mushrooms, broccolini, red wine and anchovy, and roast pork belly, wilted baby gem lettuce and smoked almond cream.
The uniting theme of all dishes, presided over by Bentley and head chef Shaz Akbar, is precision and detail. Prices are moderate for such talent and execution. The 30-plus wine list veers towards small producers and natural wines. While desserts are kept to a minimum of two – very berry tea brulee and salted caramel parfait with chocolate crumble. The cheese board is a standout whether you order one, two or three varieties. If you go for only one make it Holy Goat chevre from central Victoria. Organic and super-creamy. Eliza Food & Wine, 247 Victoria St, Darlinghurst; phone (02) 9194 5002.
Former fans of Colin Fassnidge’s Fourteen are in for a culture and colour shock when they walk into Don’t Tell Aunty – the new tenants of the inner city warehouse space. The walls are pink, Bollywood movies are playing on the screens and peacock blue banquettes and a self-serve beer fridge are just as attention-grabbing. Anyone looking for standard Indian fare should head elsewhere.

Jessi Singh, who has opened similar “unauthentic” Indian restaurants in Melbourne and the US, is the guiding force. Don’t Tell Aunty refers to the colloquial expression Indian children are chided with when they are naughty. Bring on the misbehaving if the uni biryani is the outcome – a fragrant rice dish impregnated with dates, shallots and ginger and topped with salmon roe and sea urchin meat. It’s not always available but don’t miss this standout dish if it is.
The dish that has garnered the most media attention is the butter chicken. Made without ghee or oil, it retains the rich mouthfeel the original version is noted for, thanks to the adept use of fenugreek. The other “as if by magic” dish is Colonel Tso’s cauliflower, described as an Indo-Chinese style cauliflower with tomato and chilli sauce. The florets are deep-fried to crackling crispiness and teamed with a Manchurian hot sauce. A combo that tastes very like sweet and sour pork for some reason but much better.
The Punjabi gosht curry of goat is the go-to choice for non-vegetarians. Given the affinity of Indian food with beer, the 100-strong wine list is surprisingly good with top class limited editions from small producers alongside moderately priced labels. The truly creamy kulfi ice cream wraps up an intense experience on every level – from the music through the fit-out to the food. Don’t Tell Aunty, 414 Bourke St, Surry Hills; phone (02) 9331 5399.
There’s a gag going round on the internet that the best place to meet a lot of women is Kmart, not the usual suspect dating sites. Young women also outnumbered men on the night we visited The Charleston. Maybe it’s the pastel pink interior redolent of the waterfront homes of South Carolina dreamed up by designer Matt Woods (The Rooftop, Beccafico). Or perhaps chef Ellena Kim knows what women want.
It comes as no surprise that cocktails are big from The Charleston Sling to Granny’s Special Sweet Tea. Kim’s time at The Morrison and Uccello shows in the predominance of seafood dishes, from the signature lobster roll – a pricey $42 – through the beetroot salmon gravlax, Clarence River baby octopus and king prawns with smoked chorizo and herb garlic butter.
Meat lovers are well catered for with the very moreish barbecue beef short rib – a 450g chunk of grass-fed New Zealand beef on the bone with braised savoy cabbage, chimichurri and herb breadcrumbs. The Charleston burger – a 180g rosedale ruby beef pattie, maple syrup bacon, baby cos, melted cheese, aioli, house pickles on a brioche bun and served with fries – keeps hunger pangs at bay for hours, too. As you would expect in Glebe, a lot of bottlings on the wine list are identified as vegan or biodynamic. The Charleston, 199 Glebe Point Rd, Glebe; phone (02) 9660 5717.