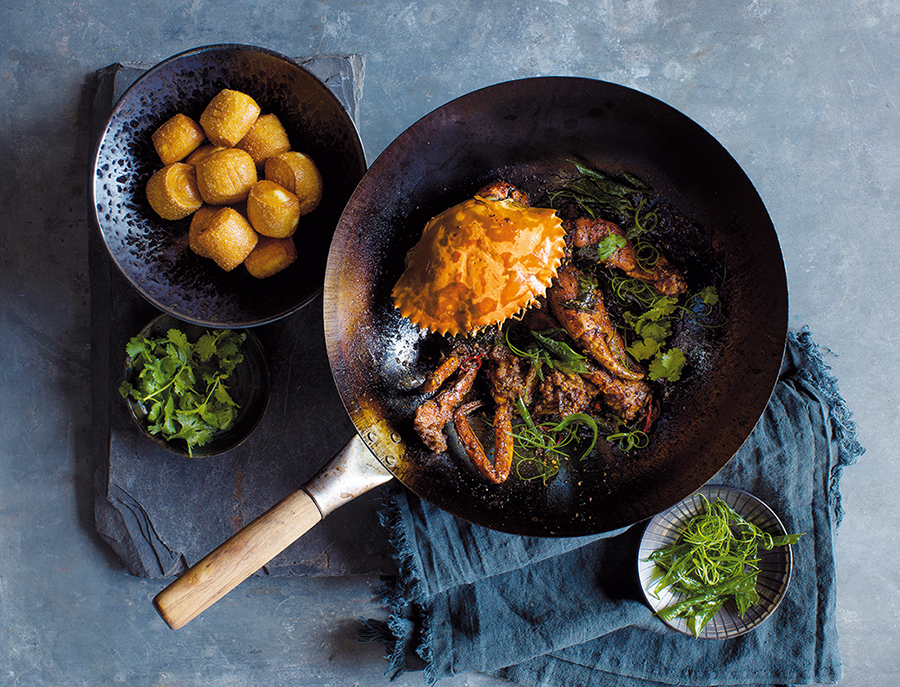 STAYING open and remaining popular for 14 years is the equivalent of a Jurassic Age in Sydney’s fast-moving dining scene. I enjoyed many lunches, dinners and events at the original Flying Fish restaurant on Jones Bay Wharf in Pyrmont. Either inside, under designer Michael McCann’s moody light fittings, or outside on the adjacent terrace with its close-enough-to-touch water views. Celebrity chef Peter Kuruvita built up a formidable reputation for standout dishes that displayed his Sri Lankan heritage such as mud crab with black pepper and curry leaves. For longtime fans, this perennial favourite has made the move to the restaurant’s new digs – only 600m across the road in the more buzzy environs of The Star casino and entertainment centre.
A lot has changed, of course. There’s a new executive chef, Peter Robertson, an alumni of The Rockpool Group. One of the first things that catches your eye are new food and drink choices aimed at high rollers who have been lucky at the gaming tables – a $995 bottle of Krug champagne and 30g of black pearl caviar for $440. Filling the former location of Stefano Manfredi’s Balla restaurant, designer Paul Kelly has opened up the space, added a contemporary nautical vibe and installed hand-blown lights that represent the spawning of fish. Even before its soft opening in late January, Flying Fish was packed when we arrived and a wave of nostalgia swept over us as we were shown to a table overlooking the restaurant’s original home and those breathtaking harbour views.
Plenty of smartly-dressed guests had stopped by for the cocktails, curated by expert mixologist Behzed Nvaziri, with a strong focus on locally-sourced ingredients and Australian botanicals. The 200-plus wine list put together by sommelier Andy Lam features a clutch of champagnes but most bottlings are Australian to go with a menu skewed towards Aussie and Kiwi seafood. To demonstrate this commitment, we were offered oysters from both the north and south coasts of New South Wales and diplomatically decided on a mix.
Sydney is having a burrata moment, so I opted for the Varella burrata, roast tomato, fennel and pangrattata – the creamy, fresh cheese sparked off the agro-dolce mix of the vegetables. Shellfish has always been a major drawcard at Flying Fish and the Moreton Bay bug busiate and mandarin koshu and Spencer Gulf split king prawns, wakame butter and macadamia reinforce the tradition. Meat lovers could start their meal with glazed pork belly and cherry radish and prawn-stuffed eggplant, and many did.
There is a stronger Asian emphasis in the mains, including glazed Rangers Vallet wagyu tri tip, shredded vegetables and pickles, “vegetarian eels,” a creative interpretation of shiitake mushrooms, wombok and fish fragrance, and snapper, miso pumpkin, prawn and macadamia. But I chose the more European combo of murray cod, peas, jamon cream, asparagus and fig leaf oil. The fish was cooked just so – crusty on the outside with a creamy, firm flesh on the interior.
Just as some people dropped in just for the cocktails, the dessert menu has built up a following, notably with tourists. A Chinese couple at the next table divided their attention between the mango, coconut ice and pandan cream and the Valrhona chocolate, malted barley and miso caramel after enjoying a couple of small plates and finger sandwiches. A relaxed feeling pervades the chic space even though high-end seafood dining remains the cash-in-hand of dining at Flying Fish. I might try my luck in the casino on my next visit to “reward” myself with Tsar Nicoulai white sturgeon caviar at $90 for a 10g spoonful.

Flying Fish, The Star, 80 Pyrmont St, Pyrmont; www.star.com.au/sydney/flyingfish.
I’m not sure if many of the diners who made Mabasa a major dining destination in Balmain for eight years regularly make the trip to Sang by Mabasa in Surry Hills. It’s hard to tell because there are only 22 covers in the latest Korean jewel from chef Seung Kee-son and his family. The parents are in the open kitchen and their son and daughter run front-of-house operations. No surprises given its compact size that Sang by Mabasa defines clean, minimalist decor.
Diners have the choice of a bar counter or two communal tables. The menu rests its considerable laurels on modern takes on classic Korean dishes from triple-fried chicken to bibimbap, described prosaically in English as mixed rice with meat and assorted vegetables. Korea’s national dish – bulgogi – is extra-luscious at Sang – barbecued Scotch fillet with seasonal sides. Dumpling fans will home in on kun mandu – tender noodle pillows packed with meat, veggies or prawns.
The exceptional dishes for me were the moon-eo sook-hwe – poached octopus, red radish, coriander and chilli – and baechu jeok – a traditional cabbage pancake with a very contemporary aesthetic. There’s two desserts for sweet tooths – kkwabaegi (twisted sourdough doughnuts) and the ice cream of the day. You can BYO for a $4 corkage fee or select from the tightly-edited wine or beer lists, including the malty Kloud beer from Korea.
Sang by Mabasa, 98 Fitzroy St, Surry Hills; phone (02) 9331 5175.
As foodies discovered on the Chef’s Table episode featuring Ivan Orkin, the brash New Yorker who became one of Japan’s top ramen chefs, the noodle soup beloved by the Japanese originated in China in the mid-19th century. Momofuku Ando invented instant ramen, the ancestor of every cup noodle brand in the world, in the 1950s, and the 1980s and ’90s saw the working class dish spark a national frenzy in Japan and a new breed of celebrity ramen chefs, including Orkin.
Ramen has become a very Sydney thing, too, and RaRa Ramen in Redfern was a hit from day one. Husband and wife owners Katie Shortland and Scott Gault trained with ramen masters in Japan and specialise in hakata-style noodles – a thinner, straighter noodle birthed in Fukuoka. They were given a secret recipe for the restaurant’s signature tonkotsu ramen which is “off” when they are away. I’d be edgy about letting the word out as well. The tonkotsu is a rich melange of smooth broth made from garlic and pork bones, topped with a succulent piece of chashu pork, seasoned bamboo shoots, ajitsuke tamago egg and shredded black fungus.
The meat and eggs used at RaRa are free range and tap beers include Yulli’s Brews from nearby Alexandria. The 28-seater restaurant has a high turnover, even though Australians prefer to linger longer not least to enjoy the light wood and polished concrete interior and pink neon light in the shape of a beer and noodles by Melbourne artist Nani Puspasari. Natural wines, Japanese beers and whiskies are perfect beverage choices. Lines can be long, especially on Friday and Saturday nights.
RaRa Ramen, 66b, Regent St, Redfern; phone (02) 9698 9994.