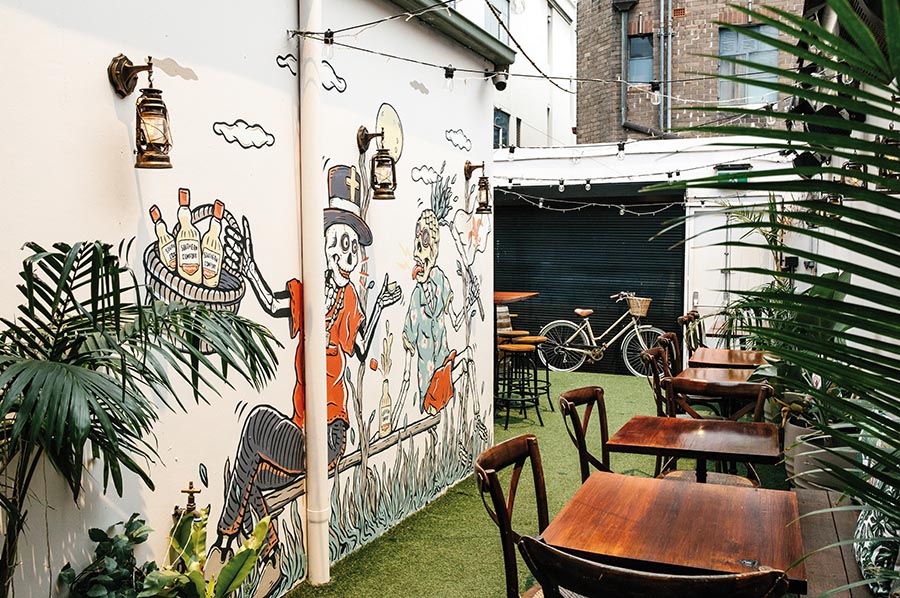 THINGS change fast in Stanley Street, Darlinghurst, even in the same building. Over the past few years, four restaurants have filled the two-storey terrace at number 77 in the city-fringe eat street – Johnny Fontane, Rabbit Hole, Wood and Smoke Bar and now The Big Easy. The name is a giveaway that the latest iteration takes its cue from New Orleans from the extensive cocktail list to the Cajun and Creole-inspired food.
The brainchild of co-owners, Doug Laming and Merlin Kibe, The Big Easy’s bar is the heart of the action. Laming is a gifted mixologist (ex-The Smoking Panda and Brix Distillers) and is in his element amid the burnished timber and lush greenery surrounding his workstation. But the decor changes throughout the multi-level space, starting from the colour-drenched outside courtyard punctuated by a New Orleans-style mural by Sydney artist, Kentaro Yoshida. Natty B takes credit for the equally eye-catching artwork upstairs in the hoodoo lounge with its dusky strip lighting and hanging ferns reminiscent of the bayous.
Laming is justifiably proud of the cocktail offerings, which have proved a major hit with the Millennial crowd. We chose the Rum Yo Mouth – a blend of Chairman’s Reserve Spiced Rum, Campari, Chairman’s Gold Rum, passionfruit, pomegranate and lime – which is tailor-made for humid climates from Louisiana to Sydney. Other Twisted New Orleans classics, as Laming describes his liquid rifs, are The Big Easy Fizz, Sazerwhack and Vodkray.
There’s also a strong wine focus from Fat Bastard chardonnay from California to biodynamic Loimer Lois gruner veltliner from Austria. Aussie highlights include Dufte Punk, an inspired blend of riesling, gewurtztraminer and kerner from the Adelaide Hills and Two Hands Gnarly Dudes shiraz from WA.
Beers receive a lot of attention too from a quartet of draught brews such as Arrogant Consortia Enter Night Pilsner, a collaboration between heavy metal band Metallica and Stone Brewing, the largest brewery in Southern California. In fact, American suds are well to the fore in the tin and bottle lineup from Deschutes Mirror Pond Pale Ale to Three Weavers Seafarer kolsch.
The food menu may be tightly edited, but it’s not an afterthought. The listings are divided into headings – Get Snacky and Get Big. For starters, the charred giant shrimp with coconut cream, lime and chilli oil was one of the best prawn dishes I have enjoyed in a long time. The crustaceans were fat and juicy and played off the condiments in texture and flavour. The grilled andouille sausage, pickled tomatillos and Tabasco Original Red was suitably spicy and best with an ice-cold beer.
The Big Easy jambalaya is the star of the main dish menu. But I have always had a penchant for blackened fish Cajun-style. If the chef doesn’t get it right, it can be a disaster. The Big Easy’s blackened Atlantic cod, Creole rub, creamed corn, toasted buckwheat and corn shoots is a contemporary take on the Louisiana classic. Sticking with seafood, we ordered the stuffed squid, filled with spicy sobrassada sausage and pepperonata. For the health-conscious, each dish has a calorie count and micronutrients info, but after a few cocktails, beers or wines only the truly obsessive would want to know or care.
A smart addition to the Stanley Street scene. Laming and Kibe are the ultimate knowledgeable yet laidback hosts and service is sharp and customer centric. You feel relaxed from the moment you enter The Big Easy and stay that way.
The Big Easy, 77 Stanley St, Darlinghurst; www.thebigeasysydney.com.

Heading south of the border, Nikkei Bar & Restaurant shines the spotlight on Japanese/Peruvian cuisine. The trend is nothing new and dates back over a century. Nikkei is the name for Japanese immigrants living overseas and mainly Japanese men headed to the sugar plantations in Peru at the end of the 19th century because the pay was better. Hard to believe now when Japan is the richest country in Asia. Many married local women and became traders and businessmen, spawning a unique cuisine that blended the flavours of both cultures similar to Peranakan cooking in Malaysia and Singapore.
Nikkei “inherited” its location from Bodega and is run by the same team behind popular Japanese bar/diners, Tokyo Bird, Bancho Bar and Osaka Trading Co. The manager, Marco Oshiro Giron, has a Peruvian/Japanese heritage and Brazilian chef, Lucas Cerullo David, holds sway in the kitchen.
The menu clearly illustrates that Lima has become a foodie mecca, thanks to globally-recognised restaurants such as Central and Astrid y Gaston. Phil McElroy (ex-Mona and Firedoor) puts the emphasis on coastal wines, whose origins span the globe from Chile to WA. There’s an open kitchen and the long communal dining table juxtaposes against the curved marble bar.
Fusion at its finest is the rule – think hokkaido scallops, capsicum salsa, edamame, chilli, cilantro, lime and wasabi and beef short rib, miso garlic corn puree, pickled red cabbage and anticucho jus. The desserts are few and just as surprising. The dulce de leche pudding, sake kasu cream, guava and coconut is a great palate cleanser after the spiced pork sausage, kale, canellini beans and daikon criolla.
Nikkei Bar & Restaurant, 216-224, Commonwealth St, Surry Hills; phone (02) 8880 9942.
Another venue with notable stablemates, Ragazzi is the latest venture for Scott Williams, Nathaniel Hatwell and Matthew Swieboda, the trio behind Love Tilly Devine and Dear Sainte Eloise. Williams is not only the chef at Ragazzi – Italian for boys – he is also the co-owner which should be a major incentive.
Not that any was needed. Ragazzi has been packing them in since the first week. Ex-MoVida and Bacco Osteria, Williams and his brigade dish up a menu dedicated to zero-waste, nose-to-tail meat dishes such as pork belly croquettes. But hand-made pasta is the major magnet for this 38-seater, laneway gem in the central CBD. I couldn’t go past the Jerusalem artichoke ravioli and pecorino and my fellow diner felt the same about the sea urchin spaghetti. A 300-plus wine list with a leaning towards natural and biodynamic bottlings principally from Italy seals the deal.
Ragazzi, Shop 3, 2-12 Angel Place, Sydney; phone (02) 8964 3062.