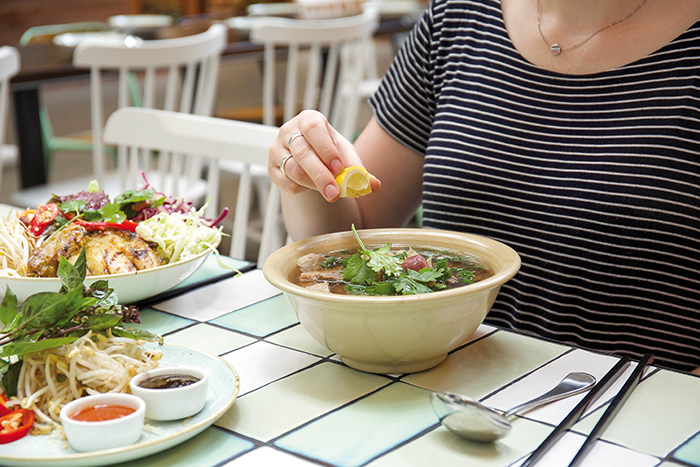 MIRVAC’S Tramsheds development at Forest Lodge attracted hordes of sticky beaks from its opening in September last year and the fascination with one of Sydney’s most interesting urban renewal projects shows no sign of petering out. Built on the site of the former Harold Park Paceway, the restored Rozelle Tram Depot was re-born as a buzzy mix of restaurants, providores and boutique stores with a major emphasis on quality cuisine. Core tenants include Eugenio Maiale’s Flour Eggs Water and Fish & Co but, although Mama’s Buoi signed on from the start, the Vietnamese favourite finally opened at the tail end of last year. I am a veteran of both Mama’s Buoi’s inaugural Sydney outposts in Crows Nest and Surry Hills. The Tramsheds eatery is the third wheel in the Harbour City and there’s also two more in Melbourne at Chadstone and the GPO. The concept is the brainchild of Vietnamese-Australian restaurateur, Bao Hoang, and the menu listings are inspired by traditional recipes safeguarded by his mother. But even though there are now five restaurants in the group, there’s no cookie cutter chain restaurant feel. In fact, the Tramsheds eatery feels like a “proper” restaurant within the heritage development, thanks to its nostalgic old Saigon decor and semi-private booths. Old menu favourites have come along for the ride, including smokey eggplant and fried chicken ribs. Newer additions to the menu such as Vietnamese pork short ribs come courtesy of Mama’s Buoi food director, Jonathan Alston (ex-Marco Pierre White in London and Stokehouse, St Kilda). The bargain choice is the seven-course menu for two at $46 per person. But we had spotted the pulled duck pancake on an Instagram post and it proved to be a piquant opener to the meal, served with pineapple, pickled carrots, mixed herbs and honey. The freshly rolled rice paper rolls with a choice of fillings – our choice was pork and prawn – was equally spicy yet fresh. Ensconced in one of the floral-decorated booths, we decided to take up the menu’s invitation to “Settle In” as the mains listings are called. Again, Instagram proved a good guide with the choice of home-style chicken curry and the photo didn’t lie. Very tender with a lightly spiced creamy sauce. The wok-tossed seafood, lavish with tiger prawns, squid and kingfish was also as good as it looked and quietened any remaining hunger pangs. Many restaurants these days restrict themselves to tightly edited menus of four or five dishes for each course, but Mama’s Buoi isn’t one of them. There’s plenty for regulars to choose from with no danger of repetition from tamarind curry to special crab fried rice. Vietnam’s Indochine legacy is a strong presence in desserts such as Vietnamese coffee creme brulee. But a taste the Americans left behind after that long ago war is the inspiration behind Mama’s chocolate brownie – the most chocolatey of treats set off by coconut ice cream. Cocktails and mocktails are a major drawcard. Think Saigon Sweets – an exotic mix of tequila, spiced rum, ginger and passionfruit. There’s Canard Duchene Champagne if you have something to really celebrate or FAQ Aussie, Italian, French and Spanish wines by the bottle and glass. Mama’s Buoi, Tramsheds, Dalgal Way, Forest Lodge; phone (02) 9552 1638.

Don’t be misled by the name of Bert’s Bar & Brasserie. The spiffy new restaurant at the revived The Newport, the iconic Northern Beaches pub, is the handiwork of Merivale. The views over Pittwater are worth the trek north and then there’s the food. Chef Jordan Toft has created a menu as sophisticated as the luxuriously appropriate decor by Akin Creative. While the atmosphere is a local version of the lush feeling you get in the prime eateries of European seaside hotspots like St Tropez and Capri. Forget pub level prices, too. The well-heeled or extravagant can indulge in 50g of Siberian caviar for $295 or a live eastern lobster for $220. Entrees from yesteryear rebooted for modern tastes are simply splendid – crudites and bagna cauda, pate en croute, prosciutto and melon and carpaccio. And the pasta line-up shows off the bounty of the adjacent eastern seaboard from taglierini with sea urchin to spaghetti with pipis and cuttlefish. The Grill & Oven listings also fly the marine-based flag with whole fish dishes centred on New Zealand turbot and John Dory the main attractions. The wine list? There’s 750 bottlings for your delectation. Bert’s is the sort of place that makes you feel lucky to be Australian and alive today. Bert’s Bar & Brasserie, 2 Kalinya St, Newport; phone (02) 9114 7300.
Located on an equally famous stretch of water close to the CBD, Seventeen is the latest restaurant to open in Walsh Bay. Many cafes and restaurants have come and gone over the years but at least the owners know the territory. Seventeen is named after its address and the fact that it overlooks the wharf’s 17 floating moorings and the restaurant is run by the team from the neighbouring restaurant, El Phoenician. Operating as a cafe by day and a glam restaurant by night, the extended hours are something of a must for the 100-seat space. Chef Clint Jaeger certainly has the runs on the board and his resume is crammed with notable names – Tetsuya’s, Banc, Bill’s and Hugo’s. There’s a pre-theatre menu, of course, because of the restaurant’s proximity to the Sydney Theatre Company. But if you aren’t in a rush, one of the go-to entrees is Seventeen’s prawn martini – poached tiger prawns with Yarra Valley caviar and Armagnac aioli. The apple duck confit, teamed with celeriac remoulade, is another great opener to stimulate the appetite. There’s plenty of top quality beef but if slow-cooking is a passion – the chicken pot pie – is the sort of luscious concoction most of us never seem to find the requisite eight hours to make. The banana parfait – creamed Callebaut chocolate, coco crumbs and salted caramel popcorn – is a standout of the tightly curated dessert listings. A second-to-none wine list and seasonal cocktails seal the deal. Seventeen, Shop 2, 17 Hickson Rd, Walsh Bay; phone (02) 9247 6790.