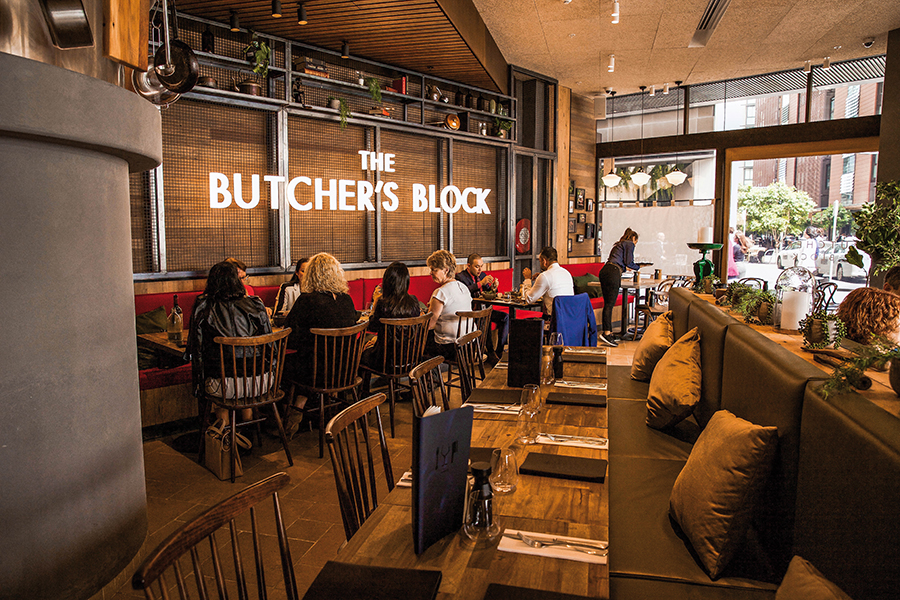 THERE’S been a spate of restaurants that started in the burbs opening spin-offs in the CBD. The latest entrant to try its luck in the Big Smoke is The Butcher’s Block, a Wahroonga stalwart that started life in an old butcher’s shop. Located in the former premises of Ete in Barangaroo, there’s little to remind diners of the former occupant or the original rustic-style cafe. Following a multi-million-dollar reno, old style butcher’s posts contrast with exposed brick, gleaming wood and metal, carefully choreographed greenery and soft mood lighting.
The kitchen is helmed by executive chef Dan Rudolph, a veteran of local hotspots Quay and Est and Guy Savoy’s Michelin three-star establishment in Paris. Like many downtown restaurants, all day dining is on offer seven days a week. We arrived on a blisteringly hot day and many of the outside tables were filled with office workers from the nearby tower blocks sipping on cocktails such as French martinis and The Butcher’s Mistress, a blend of Tanqueray gin, lychee, lime, sugar syrup and basil.
Given his impressive resume, Rudolph adopts a seasonal approach to the menus. Because of the round-the-clock opening hours, burgers are a feature for those after a sophisticated yet filling meal. Two men at another table were hoeing into the wagyu beef burger, a sumptuous feast of jack cheese, double beef, rocket, oxheart tomato, red onion and bacon aioli, and the pork katsu burger of crumbed loin, pulled pork, red oak lettuce, tonkatsu aioli and furikake.
The manager is Italian and most of the serving staff are European who unfailingly call everyone – guys. Liver parfait is still having a moment and I started my textbook three-course meal with a silky duck parfait accompanied by pancetta jam, house pickles and grilled sourdough. For anyone in a hurry, The Butcher’s Block plate for two – charcuterie, olives, pickles, duck parfait, goat’s feta and pancetta jam – represents fast food at its finest.
Seafood is a strong focus given the proximity of the harbour, from entrees such as seared hiramasa kingfish, charred witlof, pomelo lime and jalapeno dressing, to main acts such as Moreton Bay bug and pipis spaghettini “swimming” in seafood bisque and blue swimmer crab with red chilli, green shallot and fried buns.
Prime cuts of meat push home the heritage of The Butcher’s Block and are identified with their regional names from Riverina angus eye fillet to a 350g chunk of grain fed rib steak from Margaret River. Keeping things simply good, accompaniments range from a choice of house-made sauces, including green peppercorn and bearnaise, to hand-cut chips and green salad. The same sides also go with the signature rib dishes cooked for 12 hours, barbecued and glazed. You can choose from half or full racks of juicy options such as lamb ribs with soy and ginger glaze harissa and pork ribs with smoked maple glaze.
The wine and drinks list is extensive and caters for every taste, from casual drinkers to wine lovers, weaving through Australia with the odd addition of French, Italian and even a Lebanese bottling from the Bekaa Valley. Desserts are hearty if you have the room. We did and shared a warm brioche pudding with brandy anglaise and a really rich tiramisu of mascarpone vanilla mousse and coffee ripple ice cream. Warm, relaxing yet refined. The Butcher’s Block, Shop 2/100 Barangaroo Ave, Barangaroo; phone (020) 9043 1369.

Throw out any prejudices about the word lounge – airport or singer – when approaching Alberto’s Lounge. I was sad when Berta, the former restaurant on the site, closed because it was like a little hideaway in the heart of the city, tucked away in Alberta St just off the bustle of Elizabeth St.
The Swillhouse Group is in charge – Baxter Inn, Frankie’s Pizza and Restaurant Hubert – and the mood and menu is Italian to the core, with a slight Aussie overlay. The retro enoteca decor is anchored by a copious number of wine bottles, banquets and classic Italian movie posters on the walls, but looks very contemporary. Dan Pepperell, ex-10 William Street, leads the kitchen brigade and his talent is as finely honed as ever.
Dishes look small but they are filling, especially rarely seen delights like trippa alla romana. Pasta fans can take a deep dive with bucatini all’amatriciana and spaghetti alla sarde with its deeply flavoured mix of sardines, fennel, currants and pine nuts. A 600g chunk of Rangers Valley T-bone morphs into bistecca. The buzzy atmosphere and the fact that a large part of the restaurant is ear-marked for walk-ins gives Alberto’s a truly European feel. A great choice of Tuscan and Sicilian wines, and second-to-none cannoli guarantee a return visit. Alberto’s Lounge. 17-19, Alberta St, Sydney; visit www.albertoslounge.com.
Tayim is yet another revamp. This time of the old Scarlett Restaurant of the gorgeously renovated Harbour Rocks Hotel, now a luxurious MGallery boutique property by Sofitel. Sydney architects, Welsh + Major, have designed a heritage space of scrubbed sandstone and plush wall hangings. Head chef Ran Kimelfeld, formerly of Nour, presides over the moreish Middle Eastern menu.
There’s a stong emphasis on share plates – naturally. Think grilled sardine shakshuk, mushroom borekas and sumac-cured kingfish. GM Reuvin Lim, whose CV includes Tequila Mockingbird and Cho Cho San has selected wines from Turkey, France, Italy and Australia to match the hearty Middle Eastern flavours such as Yamba prawns in harissa and kangaroo kebabs with mint, oregano and paprika.
We had a small share plate because we were very tempted by the mains and plumped for lamb shoulder with white bean musabbana. A spoonful of the semolina rose pudding was a reminder that in the Arabic world a woman with a smooth, pale complexion is complimented by saying that her skin looks like a milk pudding. Open all day, the Middle Eastern deli breakfast has attracted a strong following. Tayim, 34 Harrington St, The Rocks; phone (02) 8220 9952.