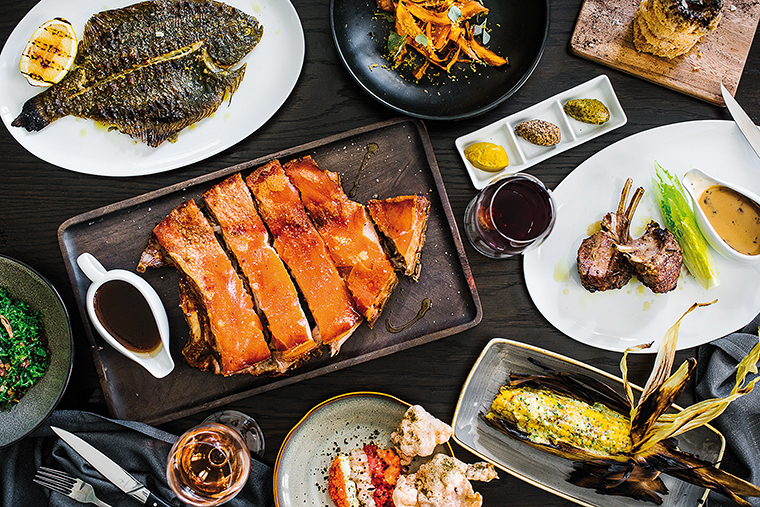 Featuring: The Grill at The Four, Verace Pizzeria, District Brasserie…

DUBLIN-native Colin Fassnidge redefined Sydney pub dining in the 10 years he presided over the kitchen at the Four in Hand in Paddington. His nose-to-tail philosophy produced memorable dishes such as braised beef brisket with licorice sauce and smoked potato puree. In the first half of 2016, new owners The Public House Management Group teamed with Guillaume Brahimi, who needs no introduction to the city’s lovers of fine food, to create gastro pub at its best. Head chef Darrell Felstead actually manned the stoves and the new menu hopped from the fairly simple – snapper in parsley sauce with mussels – to entrees and mains that were a bit too intricate for a pop-in meal.
No matter how expensive the surrounding houses are, the Four in Hand is a neighbourhood pub, albeit a heritage-listed one. If the old saying is true – millionaires love baked apples – then the re-positioning of the venue as The Grill at The Four and a makeover of the interior and menu is more on the local money than a fine dining outpost was ever going to be. With quilted leather panelling, charcoal grey seating and a deep navy carpet, courtesy of designer Amandine Odouard, the re-jigged dining room was packed when we came in from the cold. Executive chef John Collins (ex-the Royal) has based the menu on fire, or more accurately a grill imported from Brazil. There’s only one standard for the steaks on offer – super-premium – from the New York strip loin 300g Riverina black angus to the Tomahawk 1.2kg grass-fed pinnacle beef – a hefty serving to share, of course. You then select from nine sauces and compound butters, including chimmichurri and smoked miso butter, to enhance the meat lover’s version of heaven-on-a-plate. But if you are not in the mood for beef, the most expensive dish on the menu is live rock lobster with garlic and lemon at $220 or try the more reasonably priced options such as wild barramundi fillet, lamb rack from Flinders Island and Barossa chicken breast. Again, choose from the sauces and butters to liven up the succulence. Oysters and patés or parfaits are having a major moment on Sydney menus for good reason – they are simply great. We ordered the rock oysters with mignonette dressing and the duck liver parfait with pear and sourdough bread to kickstart dinner, but the linguine with spanner crab, chilli and tomato and kangaroo tartare caught our attention as they were delivered to the adjacent table. The sort of pared-back but premium offerings you look forward to after a long day earning a high salary. Baked apple isn’t on the dessert menu but modern interpretations of childhood classics are very much to the fore – pavlova with passionfruit curd, bread and butter pudding with butterscotch ice cream and banana split with caramelised banana and peanut butter ice cream. Sommelier Sean Royle (ex-Bennelong) has also taken the red pen to the former long-as-your-arm wine list and the cocktail listings are limited to the classics – negronis, martinis and whiskey sours. Even the staff have undergone a re-fresh. Instead of more reserved Europeans, most are now more laid back but still knowledgeable millennials who add to a more relaxed atmosphere for an after-work dinner or a relaxed weekend lunch. The Grill at The Four, Four in Hand Hotel, 105 Sutherland St, Paddington; phone (02) 9326 2254.

I’ll admit it wasn’t easy to find Verace Pizzeria late at night amid the huge office blocks of Macquarie Park. Perhaps we should have been guided by the polished gleam of the restaurant’s stash of trophies, including the cup for overall winner of the 2016 World Pizza Championship. Owner Stefano Cirene was chuffed by the global recognition of his chefs’ talent, but he is equally proud of Verace’s strong track record in the national pizza championships.
You don’t come here for the ambiance – the venue is next to Kennards Hire – you come here to eat. In fact, bookings are essential such is Verace’s fame. Cirene, who jokes about his ample figure, is deadly serious about the sourcing of ingredients and it shows even if you don’t fancy one of the prize-winning pizzas. We started with one of the best calamari fritti I have ever eaten – crisp and juicy without a hint of rubberiness, served with homemade aioli. Ditto the burrata with heirloom tomatoes, black fig vincotto and toasted farro. Verace means authentic in Italian and the pasta dishes toe the line. Forget about minced meat ragu, the hand-made egg pappardelle is served with traditional slow-cooked lamb shoulder that is silky soft and intensely flavoured. Verace holds a certificate from the Associazione Verace Pizza Napoletana and adheres to the governing body’s strict guidelines. The pizza menu is divided into Pizza Rosse (with a tomato base) and Pizza Bianche (without a tomato sauce). There are 18 in all, without counting the Nutella version for dessert. Our choice fell on the Patate – a perfect base of fior de latte, succulent roast potatoes, ham, garlic and rosemary. Room for dessert? You bet when one of the choices is torta ricotta e pera. It was so freshly baked, the fork mimicked a knife slipping through butter. Verace Pizzeria, 7 Klartoum Rd, Macquarie Park; phone (02) 9888 2929.
District Brasserie is situated dead centre of the CBD’s corporate dining heartland, so it’s no surprise that the wine list is 120-strong. Thousands of people beaver away in Chifley Tower which looms above the restaurant’s location in its expansive lobby. Owned by Sam Loufti and the Vissaritis brothers, the venue established itself immediately as a go-to option for executive business lunches.
The food is as simply fantastic as the Paul Kelly fit-out, from the Sydney rock oysters and roasted half chicken to the A-grade fish and chips and steak and frites – or rather Jack’s Creek sirloin. To further impress fellow diners – business colleagues and friends – go for baroque with the Valrhona chocolate mousse or the salted caramel custard with peanut butter ice-cream. District Brasserie, 2 Chifley Square, Sydney; phone (02) 9230 0900.