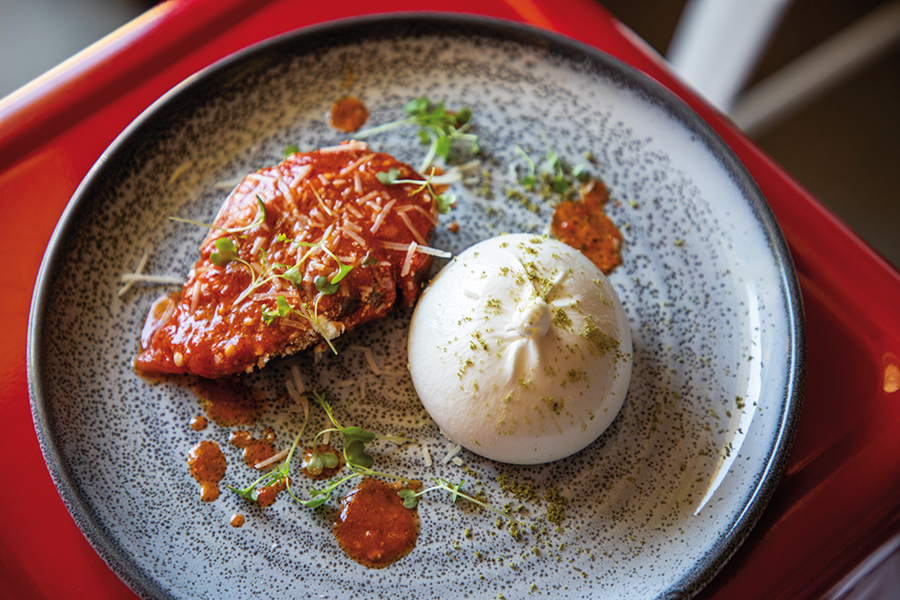 PETER Zuzza, the owner of La Disfida, is a member of Sydney’s restaurant royalty. His family ran The Mixing Pot in Glebe, long one of the best Italian restaurants in the Inner West. Ten years ago, Zuzza took his considerable expertise to La Disfida and added to the restaurant’s reputation for wood-fired pizzas with an authentic bar menu, handmade pastas and specials like the popular polenta chips with gorgonzola sauce. A wine connoisseur, he also tagged the label enoteca onto La Disfida and introduced an extensive, Italian-oriented wine list.
To gild the lily further, Zuzza has collaborated with award-winning chef, Danny Russo, to up the destination dining ante. Russo is the owner and creative director of the Russolini Group consultancy, in addition to being a master of modern Italian cuisine. He scored a chef’s hat three years in a row at L’Unico in Balmain and also helmed the ranges at Lo Studio in Surry Hills, which was tapped by Conde Nast Traveler in its annual Hot Tables list. Lauded as one of Sydney’s most inventive chefs, he has also honed his skills in London, Rome and Asia.
Perennially popular, the romance of La Disfida starts with its name. Named after a duel between 13 French knights and the same number of their Italian counterparts near Trani in 1503, La Disfida di Barletta (The Challenge of Barletta) is central to the novel, Ettore Fieramosca, written by 19th century politician and novelist, Massimo d’Azeglio, a keen proponent of the reunification of Italy.
You can feel the pride in all things Italian the minute you walk in the door at La Disfida. The feeling continues as you peruse the stuzzichini (starters) lineup, including zucchini flowers stuffed with goat’s cheese and mozzarella wrapped in speck cooked in a wood-fired oven and mains of housemade pasta such as spaghetti with mussels, garlic and white wine.
But we had come to sample the specials lineup created by Russo, which changes weekly. There were 10 share plates to choose from and we plumped for the seared beef carpaccio alla Cipriani with fried rocket and salsa rosa, the wild asparagus, 63degree egg, truffle and pecorino romano and wood fire roasted Tasmanian octopus with roast cherry tomato and nduja salsa – all of which were a first-rate combination of textures, flavour and presentation.
Pasta was next on the hit list and, again, both dishes were a benchmark of modern Italian fusion – saffron pappardelle with long line snapper, chilli and cherry tomato and orrechiette with Italian pork and fennel sausage, cima di rape and truffle. Sweet tooths were more than satisfied with the raspberry creme brule and vanilla bean gelato and burnt orange caramel.
Zuzza, working with sommelier Simone Busi, has come up with a wine list that is alone worth the trip. Awarded one wine glass in Australia’s Wine List of the Year 2019 awards, there is a strong focus on Italian grapes, including natural wines, wines aged in amphora or concrete and indigenous Italian grapes. Australian, New Zealand and Spanish wines are also in the mix to appeal to all tastes. We chose a 6 Mura GIBA Vermentino 2018 from Sardinia and a Monte Ronca Valpolicella Superiore 2018. Together with a glance back at the mural of La Disfida di Barletta, it was hard to suppress a cry of Viva Italia! La Disfida, 109 Ramsay St, Haberfield; phone (02) 9798 8299.

Advertising exec, Jakob Overduin, and business partner, James Knight, wanted to keep things simple at Hendrik’s Cognac & Wine. Opened in August, the Crows Nest bar pays homage to Overduin’s cognac-loving father and his belief that France’s finest has huge appeal to younger drinkers.
There’s certainly plenty on offer to please fans and would-be converts from 30 cognacs, cocktails such as Between the Sheets and a 100-strong wine list with over 20 by the glass.
The bar manager, Edward Wright, has worked as a personal butler in The Goring Hotel in London, where Kate Middleton stayed on the night before her wedding to Prince William. Just the right touch when you are sipping top-of-the-line cognacs such as Hennessy XO at $32 a nip.
The bar menu includes arancini, cheeseburger spring rolls, charcuterie and cheese boards and shiraz butter duck paté. But the major magnet for diners are the giant jaffles which elevate the homely snack to gourmet status. Choose from quattro formaggi, cognac, mushroom and cheese and other upscale fillings. There’s also two sweet versions – banoffee (banana toffee caramel) and hazelnut crunch. Hendriks’ Cognac & Wine, Shop 5, 29 Holtermann St, Crows Nest; phone (02) 9439 2222.
Uniqueness is the drawcard at Little Lagos, Sydney’s only Nigerian restaurant. Adetokunboh Adeniyi came to Australia in 2016 via Romania and Dubai and discovered that West African cooking wasn’t even on the radar. He teamed up with two compatriot chefs and they began by selling jollof rice, Nigeria’s national dish, and spicy stews at street markets in 2018. Last year, Adeniyi did a test-run with a pop-up located in Earl’s Juke Joint, the popular New Orleans-style bar in Newtown.
The temporary home was a success and Adeniyi opened Little Lagos earlier this year. The food and the decor are authentic and diners are split between curious locals and nostalgic West Africans. Adeniyi’s hearty goat stew has appeared on SBS Food and stews with a similar tomato base but spiced differently form the backbone of mixed meat and chicken stews. The flaky Nigerian meat pie does brisk business and asaro (yam pottage) and ewagonyi (black-eyed peas in chillies) satisfy vegetarian tastes. A real treat when you’re tired of the usual suspect cuisines. Little Lagos, 125 Enmore Rd, Enmore; phone 0416 482 820.