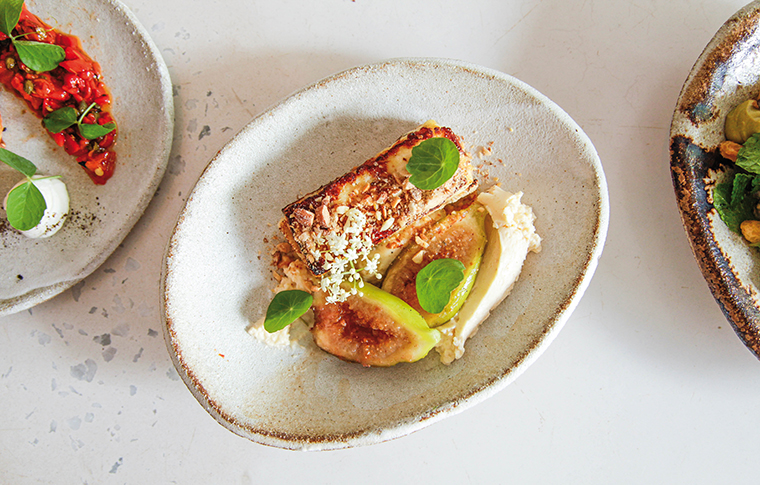 WHAT happens when a cuisine becomes so popular that an outpost springs up in every suburb? In the case of Chinese, Indian, Lebanese and more, it gets a contemporary makeover. There’s still plenty of restaurants offering traditional Middle Eastern menus, but over the past few years Sydney has witnessed the opening of upmarket Turkish eateries like Anason and Stanbouli. The Thievery at Glebe sparked queues for its sophisticated Lebanese plates and now Nour has raised the bar further in terms of decor and adventurous, elegant listings. The team behind Nour, Ibby Moubadder and Eleanor Harris, established their culinary cred with Cuckoo Callay, a quirky Newtown cafe where the main magnet is bacon-dominant brunch dishes. There’s no other connection. Nour fills the location once occupied by Japanese stalwart Tokonama and the slick 120-seat interior is a meisterwerk by DS17, the designers responsible for some of Sydney’s most arresting fit-outs, including Beta Bar and Lotus. Nour means “light” in Arabic and the blend of oak, marble and white concrete reflects the choice of name. The restaurant has appeared on the popular SBS TV show Chef’s Line, and the team in charge of the food and wine are stars in their field. Master of Wine Ned Goodwin curated the Mediterranean-inclined wine list featuring bottlings from Greece, Italy and Lebanon’s Bekaa Valley. The brigade in the open kitchen comprises executive chef Roy Ner (ex-Aria), head chef Nader Shayeb (ex-Moro in London) and Ran Kimelfeld, who worked the ranges at Tel Aviv’s notable Raphael restaurant. Even the cocktails in the front end bar, including Aida Martini and Ramman Sbritz, have a strong Levantine theme. Share plates are the thing, of course. But it’s a smart move to select three or four and opt for one of the main dishes if you’re dining a deux. The old city mix is a lure for offal lovers – yogurt flatbread filled with chicken hearts, livers and spleen – and the cauliflower falafel is an eye-opener for veggie fans. Nour’s version of hummus is light years away from the ubiquitous supermarket dip and is an object lesson in why the chickpea spread became so loved. Eggplant is another constant in Lebanese cuisine and the charcoal eggplant, complemented by pickled green tomatoes and goat’s curd emulsion, justifies the regional addiction. We shared two main dishes, hence my warning to pick one between two. The lamb shoulder is a 400g hunk of succulent meat with mograbiah (a large type of couscous) and date dressing – more than enough to keep one person’s hunger pangs at bay for a day or more. The black cardamom chicken with mushrooms, butter-poached kohlrabi and creamed corn was just the sort of fork-tender poultry of culinary dreams. The serving of two large breasts was more than enough to share, especially following one of the star turns of the menu – the Lebanese dumplings packed with spiced pumpkin. Deconstructured, as in an Armani suit, is the best way to kick off a discussion about the desserts. Baklava our way is a still life go-together of filo pastry shards, goat’s milk mousse and cashews. We passed on the pumpkin cheesecake because of the dumplings. Our waiter was keen for us to try the Lebanese bombe alaska, so we indulged him. A bit of fun from the kitchen and true to Nour’s guiding concept of the right mix of ingredients – the singed meringue hid a mouth-tingling blend of ice and creamy custardy mousse. One of the best Sydney restaurant openings of the past year. Nour Sydney, Shop 3, 490 Crown St, Surry Hills; phone (02) 9331 3413.

My first experience of Mordeo was through its Festa del Vino promotion. For only $35 a head, diners were offered eight tasting stations of Mediterranean-style food from Spanish charcuterie through pasta and oysters matched with keg wines from Printhie of Orange. When we arrived the queue of attendees snaked across the starkly modern surroundings of Deutsche Bank Place in the CBD. Mordeo means “devour” in Italian and the emphasis is on cooking from the Med from the European side. Owned by the Aspros brothers – Nicholas, George and Stephen – of the famed fish retailing family, Mordeo has become a default choice for the corporates and workers from the adjacent office buildings for a quick coffee, a relaxing cocktail or a first-rate lunch or dinner. After 8.30pm the phone rings constantly for takeaway orders from discerning diners putting in overtime who fancy a lot more than a fast food chain pizza. The five super-sized lampshades create an intimate atmosphere within a building dedicated to Bauhaus principles. The premises are split into three – the Pasta and Panini Bar, the Grow Salad Bar and the Bistro and Bar. No matter what the weather there’s a warm indoor feel and many of the regulars are on a first name basis with the staff. What they drink is just as important as their food choices, whether its Gabrielle or Campos coffee, craft beers such as Stone & Wood on tap, or the sort of wine matches made for the Med-inspired menu from France, Spain and Australia. It was a chilly, rainy night, so we chose the chorizo croquetas as a starter – super-light croquettes with manchego cheese, pickled vegetables and chilli-flavoured aioli. The grilled Cypriot haloumi and hummus with wood-fired flatbread were given due consideration before we plumped for the Clarence River grilled octopus with fennel and radicchio salad. A couple of corporates at the next table were hoeing into the 12-hour roast beef short rib – grass-fed MSA angus with smoked mash potato. Mordeo has built up a formidable rep for its pasta, so it was a tussle between the Hervey Bay prawn linguine and the tortellini special of the day. The plump pasta pillows were served on a bed of parsnip puree for an inspired taste contrast. The side of caramelised brussels sprouts with Pedro Ximenez was too much of a temptation to ignore. To finish, the affogato with Fra Angelico proved a boozy finish worthy of this CBD gem. Mordeo Bistro & Bar, 126, Philip St, Sydney; phone (02) 9232 1304.
Mini empires have become a strong trend in Sydney dining. Eugenio Maiale opened A Tavola in Darlinghurst before branching out to Bondi and opening Flour Eggs Water in the Tramsheds in Glebe. He opened Besser in Crown St late last year – named after the brick, not the German word for better. Maybe the timing was a bit off, but in May Maiale renamed the premises Flour Eggs Water, a second incarnation of his successful pasta bar. It’s all about home-made pasta, as the name implies, and wines from the keg are also a major point of difference. One of the delights of the constantly changing menu is the truffled macaroni cheese. Flour Eggs Water, 3/355 Crown St, Surry Hills; phone (02) 9331 1611.