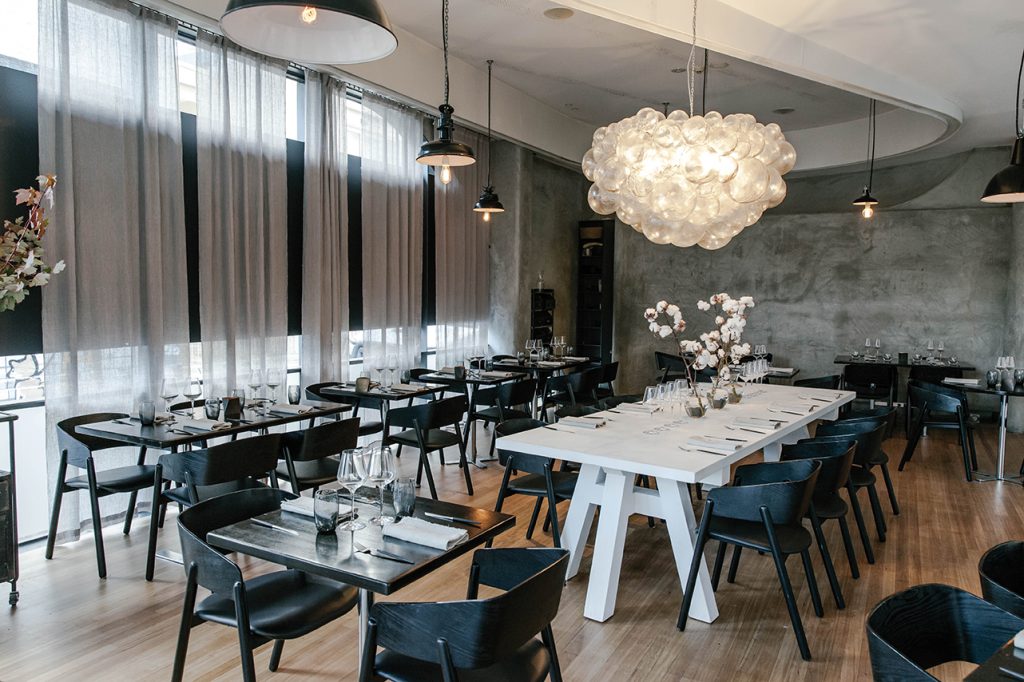 I FIRST went to Metisse on a Thursday night and the restaurant was packed. The second time I visited on a chilly Tuesday evening, the sleek grey and black space was also well-populated. I mention this because the “affordable luxury” fine dining establishment occupies a location that has experienced a bit of an ill-fated history.
Ensconced in the Barcelona building in Potts Point, the corner premises have been home to Gastro Park, Antipodean and Etelek over the past few years. But Metisse has broken the “curse” by providing Michelin-quality, French-inspired food, a non-sharing menu and bistro level prices. The owner, Opel Khan, has accomplished a lot in his 25-year career. He is classically trained and has worked with Marco Pierre White and the Roux brothers. Other highlights include writing an award-winning book – Sex in the Kitchen – and managing 15 restaurants during his time in Australia.
Khan credits the on-going gentrification of Kings Cross and Potts Point for the success of Metisse. But there’s always been plenty of well-heeled locals in nearby Elizabeth Bay and harbour-view Wylde and Victoria streets. With a kitchen helmed by Benoit Lollichon, an alumnus of Michelin-starred Guy Savoy in Paris, Metisse has lured plenty of them with a menu that offers new interpretations of French classics and creative newbies.
All of the waitstaff are French which adds an authentic touch. You can order a la carte or opt for the five-course menu degustation with accompanying wines for $100 per person. There’s also an equally moreish vegetarian menu degustation available with the same wines, including Lisa McGuigan Platinum Maximus Shiraz and Chateau Martinon Entre-Deux-Mers from Bordeaux.
French cuisine has made a strong comeback in Sydney over the past year or two. The edited menu is brimming with refurbed favourites and is constantly changing. We started a three-course meal with heirloom tomato mille-feuille with soft goats cheese and sea scallops with celeriac puree and avocado brulee. A petit baguette with French butter is priced at $5 and worth every cent to get a meal off to a true Gallic start.
Metisse, which means mixed race in French, is a nod to Khan’s diverse heritage. The signature dishes on the menu are all homages to la belle France and it’s hard to go past angus beef Rossini with foie gras parfait and truffle glaze, sous vide lamb with confit eggplant and ratatouille, and butter-poached lobster with lasagna blanket and veloute. Khan is up at the crack of dawn to select the best from the Sydney fish markets and the fang-fresh lobster we enjoyed was a textbook example of his dedication. Succulent, meaty and juicy.
Confession: over two visits to Metisse I sampled all of the desserts. Even though it sounds improbable, the chocolate croissant bread and butter pudding with salted caramel ice cream manages to be light yet rich. As does the individual tarte tatin with cinnamon ice cream and the ile flottante with anglaise cream and rhubarb compote. The trilogy of chocolate not so much, as you would expect from a triple dollop of the finest European chocolate. Metisse is a welcome addition to Sydney’s fine dining scene which won’t cause serious damage to your bank balance. A must for foodies and Francophiles. Metisse, 5-9 Roslyn St, Potts Point; phone (02) 8590 7698.

Chef Mike McEnearney is a man of many parts and talents. The former head chef of Rockpool and No 1 Bent Street is also the creative director of Carriageworks Farmers Market. A role that led him to team with Jayson Mesman’s The Truffle Farm in Canberra to offer a luxury truffle menu for two months over the winter season.
McEnearney claims that his stint at No 1 Bent Street distanced him from customers, but his new restaurant in the same premises – Kitchen by Mike CBD – replicates his former canteen-style eatery of the same name in Rosebery. The new city iteration is open for breakfast, lunch and dinner. Corporates and construction workers drop by to enjoy simply great early morning choices such as hand-made crumpets, salted and cultured butter and CBD honey or goat’s curd and vegetable kraut on sprouted buckwheat bread. High-quality ingredients are also the star turn for the lunch menu of salads and veggies, pizza wraps and quiches, and more substantial dishes such as wood-roasted chicken with brussel sprouts and harissa.
For the more sophisticated fare that has long been McEnearney’s cash-in-hand, the tempo is less rushed for dinner and the service is more suave. From 5.30pm until late, there’s a constantly-changing blackboard menu or staple entrees such as Thirlmere chicken liver paté with four spiced salt and baked Hervey Bay scallops, bacon, thyme and garlic. Main attractions can include wood-roasted Bass groper fillet, white bean and chorizo stew or twice-cooked beef intercostal, coffee spice rub and marmalade. Desserts are simple yet sensational from the chilled vanilla rice pudding, honeycomb and plum jam to dark chocolate mousses with white chocolate cream. Kitchen by Mike CBD, 1-7 Bent St, Sydney; phone (02) 9252 5550.
What do you get when the former sommelier of Porteno and Blood Wood opens his own wine bar? A bolthole that grabs your attention as soon as possible. Eric Morris opened Clementine’s cafe in Pyrmont in 2016 and added Bar Clementine earlier this year. A cosy, yet slick mix of white marble and dark, polished timber, chef Craig Gray dishes up great listings like steak and frites and one-bowl pasta dishes. Or sample his great, four-course tasting menu for $45, centred by goat ragu.
But the drinks are the thing from aperitifs such as negroni superiore (Tanqueray, imbroglio, antica formula and averna) to cocktails like rumhattan (Mount Gay rum, curacao and antica formula). There are eight wines by the glass, including our pick – Kuhling-Guillot quinterra dry riesling from Germany. For those who want to linger longer, there are 33 bottled wines from a white wine fermented on skins such as Sally Rainbows Misty Chardonnay to Gundog Shiraz from the Hunter. Bar Clementine, 52 Harris St, Pyrmont; phone (02) 8591 3660.