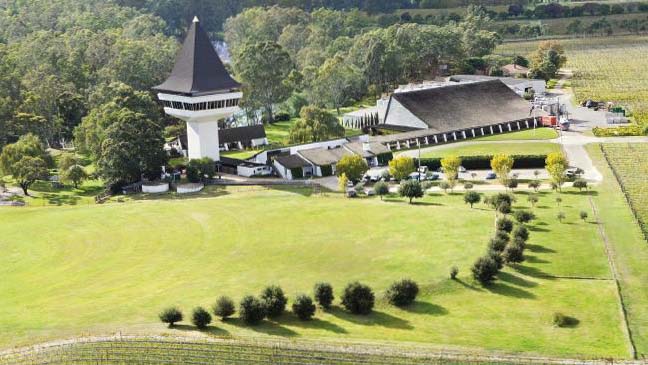 MITCHELTON Wines has added a new string to its tourism bow with the opening of The Mitchelton Hotel and Spa at Nagambie, a 90-minute drive from Melbourne.
A personal project of caravan magnate Gerry Ryan and his son Andrew, the $16 million Mitchelton Hotel and Spa is the most recent addition to the family’s spectacular Mitchelton Winery Estate, set on the banks of the Goulburn River. Initially planned for construction at the property’s founding in 1969 – a vision never realised due to budget constraints – the project has finally blossomed. Developed to enhance the facility as a tourism drawcard for the region, the Mitchelton Hotel’s 58 rooms are in a range of sizes. Featuring spacious rooms adorned with earthy tones, the hotel was designed to have a relationship with its countryside setting and, in particular, the horse studs around Nagambie. Further drawing on this connection, the hotel highlights works by Melbourne photographer Trevor Mein, commissioned specifically for the space. “The Hotel and Day Spa is something that we wanted to develop early on with our acquisition of the estate,” said Andrew Ryan, managing director of the Mitchelton property. “It has always been the missing piece in the puzzle for Mitchelton. The Goulburn Valley and Nagambie have so much to offer; we have high hopes that the addition of the accommodation facility will help attract more visitors to the region and boost local tourism.” In guest rooms, floor-to-ceiling windows open on to private terraces with expansive views of the Goulburn River or Mitchelton Vineyard. There is also a 20m infinity pool where guests can embrace the rural setting while sampling one of winemaker Travis Clydesdale’s creations. Executive chef Jess Hayes is at the helm of Mitchelton’s Muse restaurant.