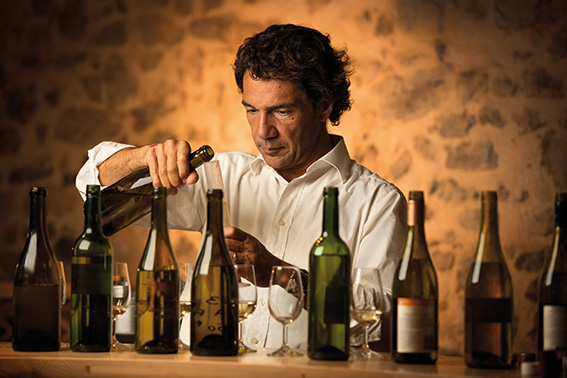 JUST over a decade ago a wine revolution occurred in Australian supermarkets. A Frenchman with a sense of humour started selling wines with critter labels to Dan Murphy’s and BWS stores. Featuring a cartoon frog on the label, the wines labelled Arrogant Frog took off in a major way. They were soon followed by another label from the same producer – Vignobles Paul Mas. The wines hit a nerve with Australian buyers, offering French style at a bargain price point. Even today, Arrogant Frog wines retail for $9.99 and Paul Mas wines for $7.99. The man behind the brands, and several others that have followed, has helped transform the reputation of southern France’s Languedoc-Roussillon region. Jean-Claude Mas, a suave, one time motor racer and global entrepreneur, is the Frenchman who has cracked several wine markets other French producers deemed too hard.
Mas, a fourth-generation vintner, paved a new path for French winemakers, taking on the new world wines that were dominating overseas markets by adopting a fresh and fun approach to both brand and winemaking. That meant screw caps, fun labels and a sustainable approach in the vineyards, where yields were slashed and quality elevated. “When new world wines started to kick us out of the market I knew there needed to be a change and we were in the right place to do it,” Mas said. “We never expected to make such an impact, and the first year in Australia was soft, but then the brand took off. The Australians shared our sense of humour, as did the Dutch and the Canadians, and we are now the No.1 imported brand in Italy. We may be big but we behave like real vignerons and respect our fruit.” French wine is now reclaiming its place in the Australian market, growing at 9.1 per cent in sales since March 2015 while the overall wine category experienced a relatively flat 1 per cent growth in sales over the same period. Today, the Arrogant Frog wine label alone sells close to 6 million bottles a year around the world.