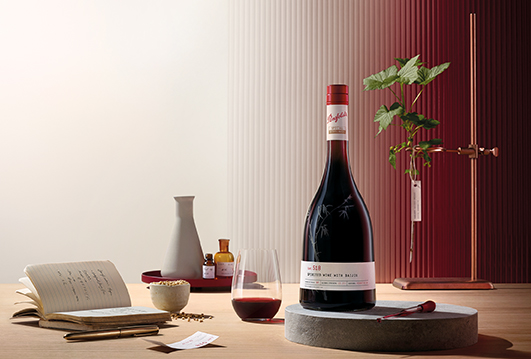 WHEN long-time Penfolds fortified winemaker James Godfrey was given the go ahead to create a series of new fortifieds, his brief was quite specific.
“It had to be good, it had to excite and had to surprise,” recalls Godfrey. He didn’t hold back. The first fortifieds released under the new brand – Penfolds Special Bottlings – are full of surprises. Lot 518 Spirited Wine With Baijiu ($150) is one of the first fortifieds in the world that uses baijiu, a traditional Chinese spirit, as the fortifying spirit behind a western grape variety, in this case, Australian shiraz. Godfrey visited China and tasted and researched many types of baijiu, but settled on a fragrant, lighter style made from fermented sorghum. “When I was given this spirit to look at, it was literally a lightbulb moment,” exclaims Godfrey. The baijiu brings a cherry spice character to the ripe, red-berried shiraz flavours in the new fortified. The wine is expected to sell well in China and, according to Godfrey, it pairs especially well with Chinese food.
The second new fortified – Lot 1990 Pot Distilled Single Batch XO Brandy ($425) – was placed in oak in 1990 and has been used in the past in Penfolds Grandfather Rare Tawny. Lot 1990 is fine and delicate, with a lifted smokiness on the nose. Both wines will be available in China and from Penfolds cellar door and selected retail outlets.