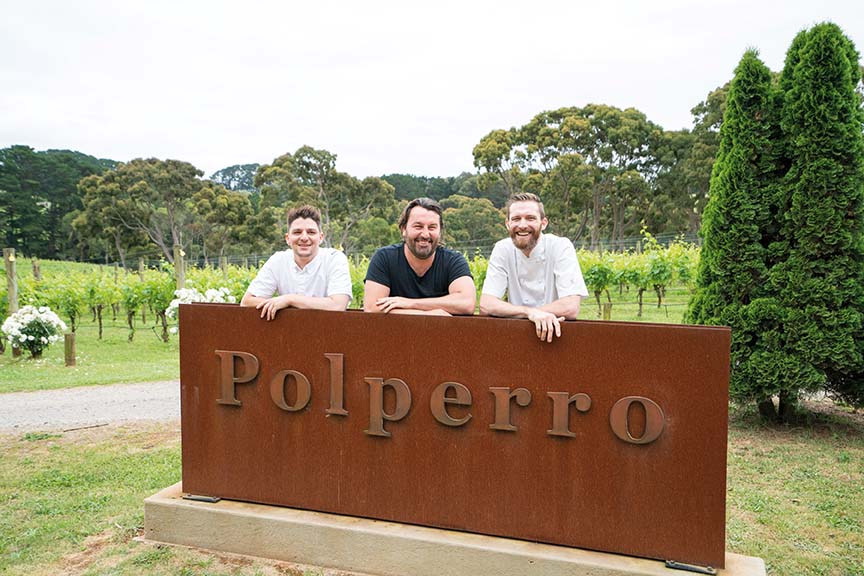 OVER the past few years, Polperro has become one of the most popular gourmet destinations on the Mornington Peninsula. Polperro owners Sam Coverdale and Emma Phillips have announced the arrival of executive chef Michael Demagistris (who has worked at Alinea, Chicago and Noma, Copenhagen) and head chef Shane Burke (Barn & Co, Stokehouse, Circa). The new menu will still feature fresh and seasonal flavours that complement Polperro and Even Keel wines, while “fostering the ethos of sharing and kinship”. The search for chefs took the Polperro team worldwide but there was a strong desire to uncover talent on their home turf of the Mornington Peninsula. “Initially when we put the feelers out to recruit new leaders for our kitchen team, we didn’t realise they would be practically on our doorstep,” said Polperro owner and winegrower/winemaker Sam Coverdale. “We are really passionate about the quality and depth of experience on the Mornington Peninsula. There is some unbelievable local talent here which we want to foster and highlight. There’s also the added benefit of understanding the local produce and our seasons, which is vital for Polperro’s future direction. We’re excited to provide Michael and Shane with the platform that will allow them to showcase their talent in the region.” The duo will collaborate with winemaker Coverdale on synergy between the vineyard and kitchen at the forefront of the Polperro ethos. The recruitment of the new chefs follows the departure of former head chef Daniel Kerekes, who moved overseas.