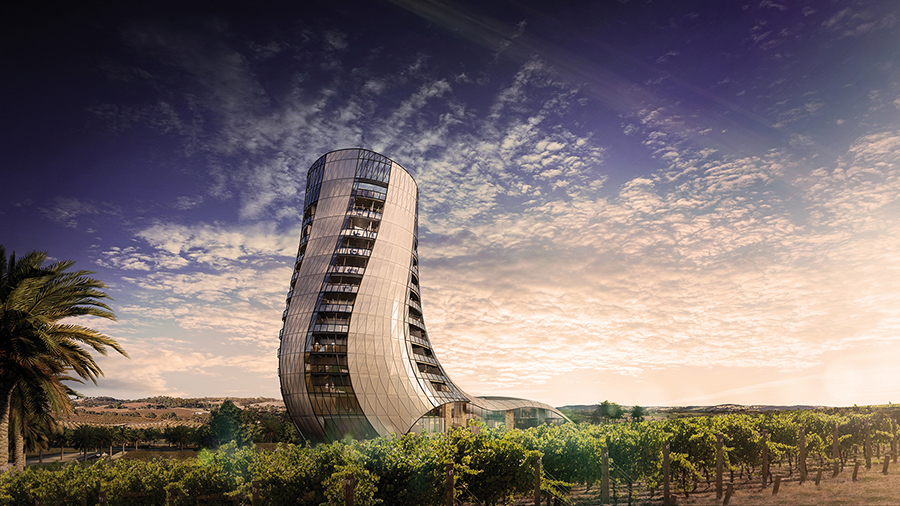 NEW GEM FOR THE BAROSSA

THE Barossa Valley is to get a 12-storey luxury hotel and day spa that should significantly boost tourism to the region. The hotel, Oscar Seppeltsfield, will be completed by 2022 and will be situated at the historic Seppeltsfield site. No operator has yet been named.
The $50 million six-star luxury hotel project will have about 70 rooms, including suites and penthouses, with a private balcony for every room. Artist’s impressions of the building set in the vineyards near the Seppeltsfield winery reveal an ultra-modern design to rival McLaren Vale’s d’Arenberg Cube.
The hotel will be on land owned by Seppeltsfield and leased to Luxury Hotels Australia for 99 years. Seppeltsfield’s ambitious owner Warren Randall said he wanted to create a national icon for South Australia.
“A Sydney Opera House for the Barossa,” he said. “Oscar will complete the grand vision of our tourism master plan for Seppeltsfield to become the most desirable epicurean destination for tourists worldwide.
“The hotel will be positioned gently in the middle of the Great Terraced Vineyard, surrounded by century-old bush vines, an amazingly tranquil location and a short walking distance to the world-class Seppeltsfield tourism village.”
The Seppeltsfield precinct is already one of the Barossa’s leading tourist destinations and includes the Seppeltsfield Cellar Door and Centennial Cellar, 1888 Gravity Cellar, Fino Restaurant, a design studio, cooperage and artisan knife maker.
Oscar Seppeltsfield will also feature a sky bar on the top level with 360-degree sweeping views of the Barossa. The ground floor will have a wellness day spa including a private entry to a relaxation space and infinity pool. The hotel will also offer a restaurant, private dining room and boardroom.
The hotel is named in honour of the innovative visionary Oscar Benno Seppelt, who took over the Seppeltsfield winery from his founding father Joseph in 1868 and went on to revolutionise the Australian wine industry.