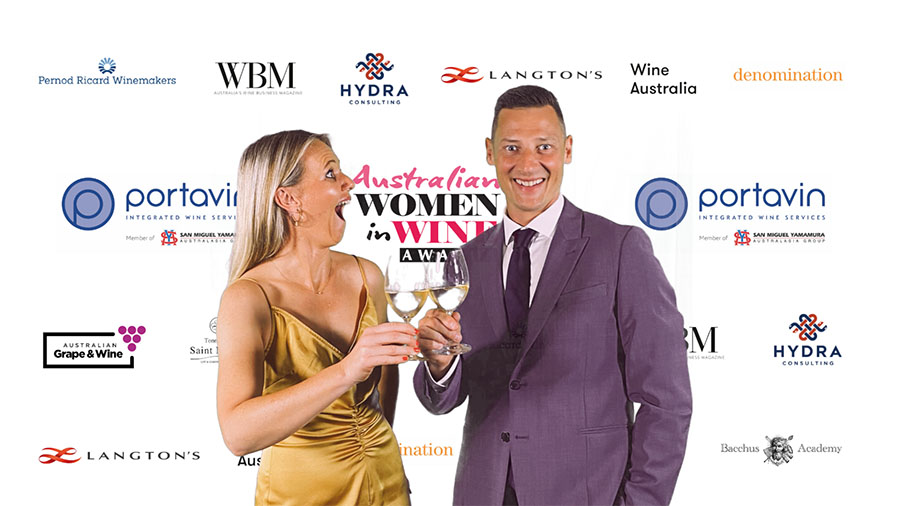 by production / Comments Off on WOMEN SHINE ON VIRTUAL STAGE AT THE AUSTRALIAN WOMEN IN WINE AWARDS / 53 View / January 18, 2021

THE winners of the 2020 Australian Women in Wine Awards, owned and operated by The Fabulous Ladies’ Wine Society, have been announced via a live, fun-filled broadcast to celebrate and reward the work of women in the Australian wine community, and community leaders who champion equality and fairness for all sexes in the workplace. They are the only awards program for women in wine in the world. The event brought a few much-needed belly laughs this year too – thanks to the involvement of one Australia’s favourite comedians.
The online-only event was broadcast live from the Langton’s TV studios in Sydney to the Australian Women in Wine Facebook page, where it was watched by wine industry folk across the country, and around the world.
Co-hosted by comedian, TV and radio personality and Grapes of Mirth founder Merrick Watts, and AWIWA Founder and Chair, Jane Thomson, the event was conducted in partnership with Langton’s TV. And Merrick didn’t hold back, sharing his insights on the wine industry in his own unique and hilarious way!
With no real-life affair possible due to COVID, it was left to “watch parties” all over Australia to create a little bit of magic for finalists and winners on the night. During the broadcast, the hosts crossed to several gatherings taking place – including Tasmania, Margaret River, Canberra, the Barossa and North East Victoria – showing a sneak peek of how people were celebrating in each state.
A live stream broadcast is not new for the AWIWA, as the awards have been streamed live every year since its inception in 2015, even when a real-life awards ceremony took place. Broadcasting the awards forms part of an ongoing commitment by the AWIWA board to engage and involve the entire Australian wine community.
Jane Thomson said that while it had been a tough year for all, the calibre of the winners demonstrates an incredible breadth and depth of female talent in our industry.
“I’m so overjoyed that we were able to keep the awards going this year, and that we could deliver an online event that brought the industry together in celebration. These awards continue to each year uncover even more amazing stories of achievement – and resilience – by women in the Australian wine industry. Congratulations to each and every one of them!”
The 2020 AWIWA winners are: Winemaker of the Year, Cate Looney, Brown Family Wine Group (sponsored by Tonnellerie Saint Martin); the Champion of Diversity & Equality, Helen Strachan, Pernod Ricard Winemakers (this award was proudly previously received by our Winestate Managing Editor, Lara Simic and we extend congratulations to Helen in this category – sponsored by Australian Grape and Wine); Marketer of the Year, Trish Barry, Mastermind Consulting, NSW (sponsored by denomination; Cellar Door Person of the Year, Jess Greatwich, Krondorf Creek Farm (sponsored by Langton’s); Viticulturist of the Year, Catherine Kidman, Wynns Coonawarra (sponsored by Wine Australia); Owner/Operator of the Year, Melissa Brown, Gemtree Wines (sponsored by Bacchus Academy) and the Woman of Inspiration Award received by Gill Gordon-Smith.